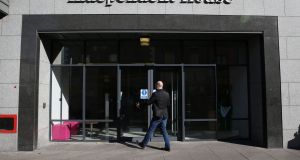 Independent House on Talbot street. INM says on its website that it “applies the UK Corporate Governance Code published by the Financial Reporting Council in the UK”.

Triona Mullane, a non-executive director of Independent News & Media (INM), who is jointly responsible for overseeing its corporate governance and is classified as an independent director by the board, received €250,000 in financial backing from a company linked to Denis O’Brien for her start-up, mAdme.

The apparent business relationship between Mr O’Brien and Ms Mullane commenced in 2014 but is not disclosed in INM’s subsequent annual reports.

Under corporate governance guidelines, non-executive directors are expected to disclose material relationships with the company, its major backers and other directors, with the information then used to designate the director’s level of independence.

For example, the 2015 INM annual report says chairman Leslie Buckley and non-executive Paul Connolly are “not considered to be independent non-executive directors, as they have material business interests/relationships with a major shareholder, Mr. Denis O’Brien”.

However, their is no such disclosure regarding Ms Mullane, who is classified as “independent” alongside four other non-executives, despite the backing her company has received from the O’Brien-linked company.

Ms Mullane sits on the INM board sub-committee which oversees corporate governance at the group, alongside non-executive Terry Buckley and the senior independent director, Jerome Kennedy.

The €250,000 was invested in Ms Mullane’s mobile advertising startup in two tranches, the second of which arrived last July. It was made using an Isle of Man entity called Jarrahdale.

Jarrahdale is owned by a Manx nominee company, in a structure similar to that employed by Mr O’Brien in several other entities linked to him.

Ms Mullane is the founder and chief executive of mAdme, which in common with many young tech start-ups is still loss-making and funded by its investors. Jarrahdale holds a minority stake while Enterprise Ireland is also a backer.

The company, which sells mobile advertising solutions to brands, lost more than €1.6 million last year and had a deficit on its balance sheet of €4 million.

Mr O’Brien’s spokesman did not respond to calls, texts and emails enquiring about the nature of his relationship with Jarrahdale and mAdme.

Ms Mullane received detailed queries from The Irish Times, including whether she had made the board aware of her company’s relationship with Jarrahdale, but she had made no response prior to publication.

INM says on its website that it “applies the UK Corporate Governance Code published by the Financial Reporting Council in the UK”.

When informed by The Irish Times of the scenario that applies to Ms Mullane, INM and Jarrahdale, the FRC said: “It is incumbent on the board to make full disclosures about director independence and related material business relationships.”

The FRC’s code says a board “should state its reasons if it determines that a director is independent notwithstanding the existence of relationships or circumstances which may appear relevant to its determination”.

It also says a company chairman “should, on appointment, meet the independence criteria”.

Separately, INM is currently embroiled in a board room corporate governance row over an aborted bid for Newstalk.