Ghost newspapers and zombie brands are stalking the media 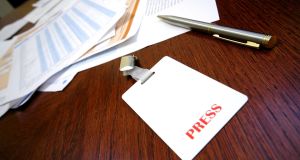 Journalists in the US are vanishing. Photograph: iStock

As the twin frights of the US presidential election and Halloween approach, it’s as good a time as any to talk about ghost newspapers, zombie media brands and other scary stories from the world of journalism.

We have had so many “ghost” things this year that it wouldn’t be weird if the Oxford English Dictionaries nominated it, in adjective form, for 2020’s sure-to-be-feverishly-contested word of the year. Ghost cities, ghost flights, ghost buses, ghost hedgehogs ... alas, that last one would take too long to explain.

Ghost newsrooms are those Mary Celeste-style offices abandoned in the first wave of Covid-19, their clocks soon falling out-of-sync with the season, their personnel condemned to gossip-light satellite kitchens for lonely wrestles with content management systems.

“Ghost newspapers” are a different monster. This is the term used by Penelope Muse Abernathy, a US journalist and former executive at the New York Times and Wall Street Journal, and her research team in their June 2020 report News Deserts and Ghost Newspapers: Will Local News Survive? It describes news titles that still technically exist and still publish, but do so as shadows of what they once were, with little original or in-depth reporting and only skeletal staff, too exhausted to trouble the Pulitzer board.

The report raises the spectre of an “extinction-level event” for US journalism after a virus-stricken 2020 (a theme that has also been taken up this year by Washington Post media columnist Margaret Sullivan in her book Ghosting the News).

It is now five years since the start of the notorious 'pivot to video', a management-led industry shift so infamous it has its own Wikipedia page

Since 2005, some 2,100 newspapers in the US – a quarter of the total – have “died”, including 70 dailies, creating multiple news voids that leave local abuses of power unchecked. But that’s only one half of the tragedy. The other is that many of the 6,700 surviving papers have become “ghost newspapers”, or “mere shells of their former selves”, with greatly diminished newsrooms. The news titles have not vanished, but the journalists have.

The problem is not unique to the US – there has been disinvestment here too – but the scale of this hollowing-out of once richly resourced journalism makes the US a special case.

Ghosts are not created by accident. The cycle by which large hedge funds and private equity firms buy up titles, consolidate them into highly leveraged mega-chains and strip out their editorial resources in pursuit of ever-more elusive profits has been especially pronounced across the Atlantic, and is not limited to the inky end of the market.

US journalists seeking employment at digital media outlets must often play a dizzying game of chase-the-venture-capital, in a sector where ambitious rates of hiring followed some months or years later by lay-offs, announced abruptly whenever the return on investment didn’t quite turn out as promised in the pitch presentations. More than once this has played out on social media, with journalists thanked for their hard work, then locked out of their company emails mid-assignment. In each gap between gigs, talented people leave the profession in order to pay their rent.

The speed with which capital flows in the direction of the next big thing is also what differentiates the US landscape from the European one. It is now five years since the start of the notorious “pivot to video”, a management-led industry shift so infamous it has its own Wikipedia page. This was the phenomenon whereby writers were let go en masse and replaced with video journalists in a bid to exploit the higher rates media outlets could charge for digital video ads (known variously as pre-roll, mid-roll and kill-me-now ads) compared with other online ad formats.

'Zombie' media brands weren’t born this way, but at some point in their life, they fell victim to the scourge. They became the undead

There was just one small problem with this: the enthusiasm was based on Facebook video consumption numbers that were, well, not accurate. When the extent of the mistake dawned on the holders of the purse-strings, it was the turn of the videographers to lose their jobs.

The “pivot to video” was stupid and embarrassing. But at least it still at its heart involved an effort to create content. The grimmest companies to alight upon the media are the ones that operate under a more-for-less delusion, in which only minimum output is meant to somehow rake in a cash bonanza. When the sham flops and the investors lose money, they are oddly surprised.

This naivety – or greed, whatever you want to call it – can pop up everywhere, but again it is in the US where it is so advanced, it has an expanding lingo. Everybody in the industry knows that a “content mill” or “content farm” refers to a volume-obsessed, clickbait-only site kept alive by graduates on pittance rates, with a little help from unpaid contributors sourced from the wider readership.

“Zombie” media brands weren’t born this way, but at some point in their life, they fell victim to the scourge. They became the undead.

This time last year, I was reading with slow horror about the gutting of the once-respected magazine Sports Illustrated, where a deal giving control of the title to a spacebar-challenged start-up called TheMaven coincided with mass lay-offs and a new strategy based on cheap churn. The account came courtesy of some colourful reporting on the sport, politics and culture site Deadspin. But within weeks, the staff of Deadspin itself had all resigned in response to a morale-killing order from its new private equity owners to “stick to sports”.

Bryan Curtis, editor-at-large of The Ringer, was in no doubt: what happened to Deadspin was, in honour of the company that undid Sports Illustrated, a “Mavening”. A “Mavening”, he wrote, is the process by which “media overlords taunt readers by forcing them to watch as they drag around the corpse of a beloved friend”.

Something else to have nightmares about.