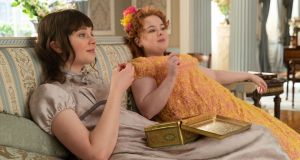 On December 25th, 1914, French, German and British soldiers headed into no man’s land to exchange food, tobacco, souvenirs and Christmas greetings. No such unofficial truce will be undertaken in the great, if somewhat less consequential, streaming wars of the 2020s.

This Christmas Day will instead be an active front in the battle for subscribers as streamers advance their mission to secure warm, fuzzy subscriber loyalty.

Disney, which has lured more than 60 million subscribers to Disney+ in less than a year, has shattered whatever illusions were left among suffering exhibition chains by pulling the cinema release of Soul, a Pixar animation about a jazz-loving teacher who winds up in “the Great Before” but is desperate to return to Earth for some reason.

Originally scheduled for a big-screen run to coincide with the US Thanksgiving holiday, Soul will now land on Disney+ on December 25th, when its blend of bright colours and the exploration of the meaning of life will pair nicely (for adults) with a pre-noon Prosecco and cheese-loaded cracker.

Meanwhile, Netflix has chosen Christmas Day as the date for launching Bridgerton, the first series to be delivered from production company Shondaland after superstar writer-producer Shonda Rhimes agreed a 2017 mega-deal with the streamer.

Bridgerton, an eight-part series based on novels by Julia Quinn, has been billed as a cross between arch teen soap Gossip Girl and period farce Downton Abbey, though its setting is a century earlier than the latter, based as it is in the Regency London marriage market, and its episodes have titles like “The Duke and I” and “Art of the Swoon”.

Indeed, Netflix has consistently maintained that there is space for it to peacefully co-exist alongside not only Disney+, but a whole array of streaming services, including WarnerMedia’s HBO Max and NBCUniversal’s Peacock (US-only newbies), Apple TV+ and older hands Amazon Prime Video, the rich sleeping giant of the streaming universe. Netflix is in no doubt that the eventual loser in this is linear TV.

The “astounding” growth of free, user-generated video platform TikTok, cited as an example of “the fluidity of internet entertainment”, also got a mention in Netflix’s last letter to shareholders, before it swiftly concluded that it wasn’t bothered. “Instead of worrying about all these competitors, we continue to stick to our strategy of trying to improve our service and content every quarter faster than our peers.”

As the motivational T-shirts say, you got this. Still, it has been a drama-filled year for both Netflix, the world’s biggest streaming service, with some 192 million subscribers at the last, soon-to-be-updated count, and Disney, owner of the fastest-growing one, and not one that either company could have foreseen.

For Netflix, pandemic restrictions have triggered a surge in subscribers that it has been very careful to describe as a pull-forward of growth that it would have achieved anyway over a longer stretch, rather than bonus customers per se. As a result, when it releases its third-quarter earnings after the close of Wall Street trading tonight, all eyes will be on whether it was correct to be so cautious, or if it will again surprise on the upside.

This acceleration of Disney's streaming ambitions is pragmatic and timely

Disney+ launched in five countries in the Great Before, which in this case means November 2019, before extending to eight European countries including Ireland on March 24th, when it made a glorious splash thanks to a combination of Disney’s brand strength (and that of subsidiaries Pixar, Marvel and Star Wars profit machine Lucasfilm), pre-pandemic playground chatter and a virulent lockdown strain of pester power.

While the company doesn’t break down its subscriber numbers by country (none of the streamers do), a study by Core Research suggested that 20 per cent of the Irish public had tried the service by the start of June. (A seven-day trial was initially available.)

The wild ride of the year for Disney then saw it beat such a hasty retreat from cinemas, it left scorch marks on the carpet. Amid the onset of a second wave of coronavirus, Mulan, the live-action remake of the 1998 animated movie, debuted on Disney+ on September 4th for the additional fee of €21.99.

This was a rare example of a favourable currency translation for Irish consumers, given the US price was $29.99 and must have proven an acceptable price for at least some households that found their treat options otherwise curtailed by Covid-19. The rental fee disappears, however, from December 4th, when Mulan becomes available to all Disney+ customers as part of their €6.99 a month or €69.99 a year subscription, and there has notably been no attempt to slap an extra charge onto the cost of watching Soul.

Disney, which is exposed to a volatile advertising market through its television interests and has had a horrendous time in its theme parks, was last seen restructuring its various media and film units into a single group that will put Disney+ closer to the heart of its operations.

This acceleration of its streaming ambitions is pragmatic and timely. Consumer outlays on home entertainment, in the absence of the out-of-home kind, have never been easier to justify, at least in households lucky enough to avoid income knocks. In a world of lockdowns, shuttered buildings and threats to cancel Christmas, paying for multiple streaming subscriptions simply won’t, for many, feel like quite the same extravagance as it did in the Great Before.