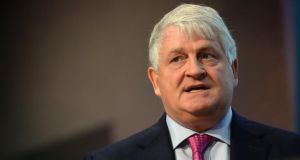 Journalists from the Currency were banned from stations owned by Denis O’Brien’s Communicorp last month, with an email citing its status as a ‘competitor platform’. Photograph: Dara Mac Dónaill

The National Union of Journalists (NUJ) has expressed its concern to the broadcasting regulator about Communicorp’s ban on certain journalists appearing on its radio stations as well as the regulator’s lack of intervention in the matter.

The NUJ has asked the Broadcasting Authority of Ireland (BAI) to carry out a full investigation into the group’s ban on employees of the Currency, imposed when the business news site launched last month.

That move came on top of a longer-standing ban on Irish Times journalists appearing on Communicorp-owned stations including the national stations Newstalk and Today FM.

In a letter to BAI chief executive Michael O’Keeffe, NUJ Irish secretary Séamus Dooley said the union was “gravely concerned” by the situation as well as the BAI’s subsequent public statement that it would not be appropriate for it to act.

“The current ban on editorial contributors to the Currency is, like the Irish Times ban, based on commercial not editorial considerations and is therefore a matter for the BAI,” Mr Dooley has written.

An email to Newstalk staff from its assistant programme director had cited the fact that the Currency was “a competitor platform” as the reason why its journalists should be barred from acting as presenters, contributors or panellists.

Mr Dooley said the NUJ accepted that the BAI had no remit in determining direct editorial content, but stressed that it did have a role in regulating to achieve “a responsible and accountable broadcasting sector”.

The union believes the position of the regulator in the wake of the Currency ban is not consistent with the BAI’s move in October 2017 to seek clarification from Communicorp on the ban imposed on Irish Times journalists after Irish Times columnist Fintan O’Toole was critical of Newstalk.

The union also noted that the regulator played “an important role” in the merger of Today FM and Newstalk in 2008, exercising its powers in relation to how the two stations’ newsdesks would function.

The NUJ added that the ban on the Currency’s Ian Kehoe and Tom Lyons was “of particular concern” given their record of journalism that “has not always met with universal approval, including by individuals associated with Communicorp”.

The radio group is owned by the billionaire Denis O’Brien, whose business affairs have been either reported on under the byline or editorship of Mr Kehoe and Mr Lyons at their previous media outlets.

Mr Kehoe is the former editor of the Sunday Business Post, where Mr Lyons was deputy editor.

“The NUJ is requesting that the BAI carry out a full investigation into the ban, with particular emphasis on the policy of imposing editorial directives across all stations,” Mr Dooley’s letter concludes.

Taoiseach Leo Varadkar and Fianna Fáil leader Micheál Martin were separately among the signatories of a joint letter sent this week from members of the Dáil to Communicorp chief executive Adrian Serle calling on the ban to be lifted.

1 Michael Smurfit: total lockdown of economies a ‘serious mistake’
2 Satirical column and photograph of child among complaints to Press Ombudsman
3 Joint accounts: if one of us dies, can the other access the money?
4 Trinity Biotech expects Covid-19 immunity test to be authorised shortly
5 Former Quinn Insurance director Liam McCaffrey settles with Central Bank
6 O’Leary’s call for easing of flight restrictions criticised by health experts
7 Working from home: New costs, new stresses and little relief
8 Pandemic Unemployment Payment: Your questions answered
9 Stocktake: History says this is not a bear market rally
10 We are ‘sale agreed’, but can we go back with a lower offer?
Real news has value SUBSCRIBE