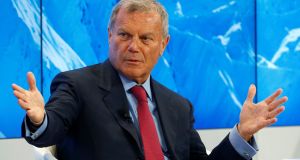 The world’s best-known advertising boss is building up the new venture following his departure from ad giant WPP, sealing deals for digital content that runs on platforms like Facebook and Google, and the automated placing of ads online.

Sorrell said digital growth was “on fire” and his focus on it meant he was currently involved in five large pitches.

S4 will gain access to Firewood’s client base in the United States, including Facebook, Google, LinkedIn , Salesforce and VMware.

S4 raised £100 million (€111.4 million) through a placing to part fund the Firewood deal and to build up a war chest for future acquisitions.

Rather than replicate WPP, the world’s biggest advertising company he created with a holding company model, Sorrell is buying smaller agencies and merging them into one arm producing content and one arm handling the programmatic placing of ads.

“I don’t want to end up with a fragmented model,” he said.

Sorrell said he is still looking to acquire companies that own first-party data on consumer habits, but said he had two small deals looming for data analytics companies, with one in London and one in Korea.

“They will slot in to the programmatic offer,” he said.

S4 has already won work from the likes of Procter & Gamble, Nestle, Coca-Cola and Sprint and had said it was being asked to bid for other major clients.