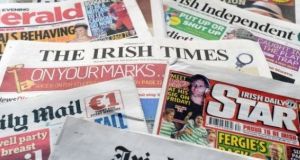 Reach acquired the initial 50 per cent stake in Independent Star from Richard Desmond’s Northern & Shell in 2018 as part of a wider £127 million (€144 million) acquisition of the Express and Star newspapers and OK! magazine

Plans by British newspaper publisher Reach to take full ownership of the Irish Daily Star are to be challenged, the National Union of Journalists (NUJ) has said.

The union warned it will use provisions contained within Irish media-merger laws to challenge Reach’s full takeover of Independent Star, a joint venture it owned with Independent News & Media.

Reach, formerly known as Trinity Mirror, last week announced it had agreed a deal to buy the 50 per cent stake it doesn’t already own in Independent Star for an undisclosed sum. The news has angered staff working for Reach, given that it comes just week after the company said it was to cut 550 jobs in Britain as it struggles with the effects of falling sales and advertising during the Covid-19 crisis.

As well as the redundancies, about 1,000 members of staff have also been on the British government’s furlough scheme since April.

If they are in financial difficulty, how can they spend money on the Irish Daily Star?

NUJ general secretary Michelle Stanistreet said there is “seething anger among members” at Reach’s move to expand its portfolio while at the same time cutting jobs.

“We cannot stand back and allow this proposed transaction to proceed without a challenge,” she said.

Under media-merger rules, the Competition and Consumer Protection Commission (CCPC) has to examine the implication of the proposed acquisition on the local market before allowing it to proceed.

Séamus Dooley, NUJ assistant general secretary, said Reach is already the dominant player within the red top segment locally. He said he hoped Minister for Media Catherine Martin would use her extensive powers under Section 28 E of the Competition Act to investigate the deal.

The British Association of Journalists, which is the recognised union for many of the staff at Reach, has also criticised the acquisition. It has questioned why Reach is investing in another print newspaper when it has previously said its primary focus is on digital, according to Press Gazette.

Reach acquired the initial 50 per cent stake in Independent Star from Richard Desmond’s Northern & Shell in 2018 as part of a wider £127 million (€144 million) acquisition of the Express and Star newspapers and OK! magazine.