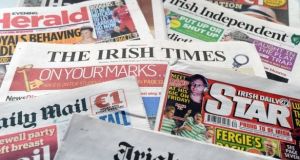 The deal is expected to be completed later this year subject to receiving competition approval.

Reach, the British newspaper publisher formerly known as Trinity Mirror, has agreed to buy for an undisclosed sum the 50 per cent stake in Irish Daily Star publisher Independent Star that it does not already own.

The company is purchasing the stake from Independent News & Media (INM), with the deal expected to be completed later this year, subject to it receiving competition approval.

Reach, which also owns the Daily Mirror and the Daily Express in Britain, was cleared to buy its initial 50 per cent stake in Independent Star two years ago, although with the proviso that any directors it appointed would have no responsibility for the day-to-day running of any other Reach newspaper business in the State.

The group acquired the initial stake from Richard Desmond’s Northern & Shell as part of a wider £127 million (€144 million) acquisition of the Express and Star newspapers and OK! magazine.

In the Irish market, Reach publishes the Irish Daily Mirror, the Sunday Mirror and the Sunday People, while it also owns RSVP magazine and the websites dublinlive.ie and rsvplive.ie.

“It is a natural next step for us to acquire the remaining 50 per cent and we are delighted to have reached agreement with INM,” said Reach chief executive Jim Mullen.

Shares in London-listed Reach were up 1.45 per cent in trading on Thursday afternoon.

The publisher earlier this month announced plans to cut 550 jobs in Britain as it struggles with the effects of falling sales and advertising during the Covid-19 crisis. About 1,000 members of staff have also been on the British government’s furlough scheme since April.

Marc Vangeel, chief executive of INM, said the offer from Reach, if approved, would “ensure the newspaper has a bright future”.