The RTÉ One special was watched by more than 1.5m people over the weekend 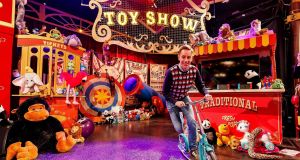 More than 1.5 million people watched the Late Late Toy Show over the weekend, making it the most watched programme of the year.

The show, hosted by Ryan Tubridy, was viewed by an average audience of more than 1.3 million live on Friday night, a 74 per cent share of the audience watching television at the time and an 89 per cent share among children.

A further 141,700 viewers watched a recording of the show on Saturday and another 51,900 viewers did the same on Sunday. In addition, 113,000 watched the repeat broadcast on RTÉ One on Saturday.

Mr Tubridy said he is “blown away every single year” at the reaction the Late Late Toy Show receives.

“As a team, we are so honoured that people open their arms and welcome us in for such a magical night, and I sincerely hope it was as much fun for our viewers as it was for me on Friday,” he said.

“The production team and the children are what make the Toy Show special and memorable and I want to thank everyone involved, from little star Michael to our heroes Grace and Scott, to the set and costume designers. I’m delighted viewers loved it as much as we did.”

Late Late Toy Show producer Eimear O’Mahony said that with the Greatest Showman as this year’s theme, “we really wanted to showcase inclusivity”.

“We are thrilled that so many people tuned in on the night to see children from all parts of Irish society shine like the stars that they are – they are the true essence of what makes the Toy Show so special,” she said.

RTÉ’s director of audiences, channels and marketing, Adrian Lynch, said: “These are phenomenal viewing figures across television and [RTÉ] Player for what has become one of the biggest dates of the year in the RTÉ calendar.”