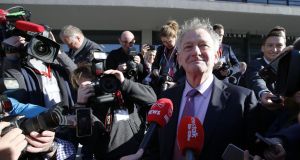 Peter Casey arrives at Dublin Castle the day after the election. He is now picking up the Newstalk microphone. Photograph: Nick Bradshaw/The Irish Times

Businessman Peter Casey, who ran as a candidate in October’s presidential election, is recording a project for Newstalk, the radio station owned by Denis O’Brien, and it will air in the new year.

However, a spokesman said he would not be given his own regular show, and rejected suggestions that Mr Casey would be a replacement for the weekend slot vacated by George Hook.

Mr Casey, who finished second in the presidential election with 23 per cent of the vote, is understood to be authoring reports for the Communicorp station under the project, which will run across its main weekday shows.

It is expected that they may touch on subjects favoured by Mr Casey during his campaign.

The businessman and former “dragon” on RTÉ television show Dragon’s Den generated headlines by expressing criticism of aspects of Traveller culture. He said Travellers should not be recognised as an ethnic group and suggested there was “plenty of room in the Phoenix Park” into which they could move.

The US taxpayer from Derry also claimed Ireland was becoming “a welfare-dependent state”.

Mr Casey (61) subsequently said in a post-election interview on the Late Late Show that he intended to run for a Dáil seat in Donegal “and perhaps one or two other constituencies as well”, courtesy of running mates.

The wealth of the Irish – how do your assets match up? 12:16
Commission ready to clamp down on sweetheart corporate tax deals 11:01
KBC Ireland fined €18.3m for ‘unconscionable’ tracker scandal role 11:00
JPMorgan Chase halts plans to bring back workers to London base 10:53
Women accounted for 60% Iseq board recruits in 2019 10:05
Search executive
jobs on irishtimes.com