Irish shoppers should rise up over UK retailers’ levy

With items as much as 20% more expensive online, rental costs are simply no excuse 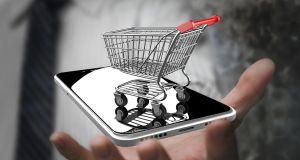 Why are we charged a Paddy Levy by British online retailers?

Why do Irish online shoppers often pay about a fifth more than British shoppers for the same goods from the same online retailers? Is there a 20 per cent Paddy levy – or Plevy if you will – slapped on our feckless shoppers by proprietors across the water? It certainly feels that way.

Since the Brexit vote in June, sterling is down by almost a fifth against the euro. It’s funny – and not in a good way – that this is often roughly the extra you pay on the Irish versions of UK fashion retailers’ websites for identical purchases.

The fear among many Irish retailers heading into Christmas is that UK retailers, competitively buoyed by Brexit and the backside falling out of sterling, would crush their indigenous rivals here with subterranean prices fuelled by the rate advantage.

If only Irish consumers were so lucky. We get hit with the Plevy.

Marks & Spencer is a good example. This week, M&S announced it was scaling back its international business, although it remained committed to “profitable” Ireland. A click onto the Irish version of the M&S website shows why we are so lucrative.

A pair of M&S Collection regular fit water resistant jeans costs £29.50 (€33.50) on its UK site, delivered free to a store. The same jeans, delivered to an Irish store, cost €40 on its Irish site. That’s a Plevy of 19 per cent. It’s online shopping, remember, so you can’t blame Irish rent or rates.

“Like any business, we have to take into consideration a number of factors specific to the Irish market when setting our prices, such as higher employment, rental and operational costs,” M&S said. How much rent is involved with a website?

It would be unfair to single out M&S, just because it this week chose to highlight the profitability of its Irish business. On the UK site of Next, a men’s heavyweight crew jumper is £26 (€29.54). On its Irish site it is €36, or 22 per cent more expensive.

The online store for the Arcadia-owned Miss Selfridge chain is especially adept at administering the Plevy. If, unlike me, you’re sartorially confident enough to buy your wife or girlfriend a racy dress, then how about a black lace bodycon number? It is £35 (€39.71) on the UK Miss Selfridge site, but €49, or 23 per cent dearer, on the Irish site. Selena flare sandals are £45 (€51.06) on the UK Miss Selfridge site. Click on the mirror site for Ireland, and the same sandals are €65; a painful 27 per cent extra.

UK retailers are on slightly less shaky ground when they justify charging Irish shoppers extra from bricks and mortar shops, where the cost base with the UK might be out of whack. But that argument falls down when it comes to online shopping.

Please, kill the Plevy, before it kills our goodwill for the Christmas shopping season.

Trust the Corkonians to find a clever marketing angle on Brexit.

The Cork Chamber of Commerce held its annual dinner behind enemy lines in Dublin’s Doubletree by Hilton hotel, formerly the Burlington, on Tuesday. EMC’s Dick Lehane got the outstanding achievement in business award.

Chamber president, KPMG’s Barrie O’Connell, and speaker Pat Cox were both noticeably on message in relation to Brexit.

Cork, they stressed over dinner, should be marketed as “the second-largest English-speaking city in the European Union”.

Dublin, presumably, should market itself as the largest.

Denis down in the dumps?

How disappointed must businessman Denis O’Brien feel over Hillary Clinton’s defeat in the US presidential election race?

O’Brien is a long-time ally and friend of the Clintons, a major donor to their charity foundation and he has worked closely with them in post-earthquake Haiti.

O’Brien was dragged into the campaign recently by a rampaging Donald Trump, who released a rambling press release highlighting the Irishman’s links with the Clintons and their foundation, using descriptions of O’Brien that might land you in court if you tried to repeat them in Ireland.

O’Brien must have been readying congratulations for his friends before the surprise result rolled in, and perhaps contemplating the prestige that might come with having a direct link to the White House.

Instead, the US presidency has gone to a man with, if Trump’s press releases are anything to go by, hard feelings against him. His encounter with Trump certainly won’t help the Irish businessman whenever he tries again to float Digicel in New York, Trump’s home city.

Meanwhile, the funniest characterisation of Trump came from comedian Karl Spain, who quipped on Twitter that the US president-elect is a unifying force in Irish terms, being both a Republican and an orange man at the same time.