Turnover rises 0.4 per cent in ‘challenging but improved’ trading environment 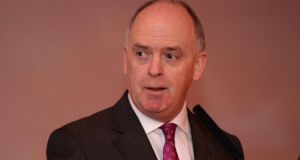 The Irish Times Ltd made an operating loss of €1.1 million before exceptional items in 2015, compared with an operating profit of €840,000 the previous year, the latest accounts for the media company show.

The pretax profit for 2015 arrived at €51.7 million, following a once-off €53.6 million gain on the wind-up of the company’s two defined-benefit pension schemes.

Group turnover increased 0.4 per cent to €83.6 million in “a challenging but improved trading environment”, as growth in advertising revenue more than offset a decline in circulation and contract printing income.

Advertising revenue grew 5.3 per cent, with both print and digital ad revenue rising.

Managing director Liam Kavanagh said The Irish Times had invested in journalism and technology during 2015 and would continue to explore ways to grow its digital audience, especially on mobile.

He said the company would have to reduce its costs in light of less favourable advertising trends in 2016.

“Pre-Brexit, there was some uncertainty and brands held back from spending on campaigns,” Mr Kavanagh said. The UK’s vote on June 23rd to leave the European Union has now clouded the outlook for advertising revenue for the latter half of the year.

Facebook’s share of the Irish advertising market has also expanded.

“They are taking share from all other media, and that includes newspapers,” Mr Kavanagh said.

Circulation revenue fell 4 per cent in 2015, as purchases of print newspapers continued to decline.

During 2015, The Irish Times launched its digital subscription plans, creating a new revenue stream. The company now has 45,000 subscribers, which includes people who take home delivery of the print newspaper, digital-only subscribers, corporate customers and some non-paying subscribers to the Irish Times Student Hub.

Based on current trends, about 17 per cent of 2016 publishing revenue will come from digital, with total digital revenue on track to exceed €10 million this year, Mr Kavanagh indicated.

He said the company planned to develop digital revenue further, while also cutting back on costs, in order to return to sustainable profitability. The Irish Times, which is owned by a trust, is “not here to make a profit, but if we don’t make a profit we won’t exist”, he said.

In a bid to encourage more non-subscribers to sign up, the company recently tightened its meter on the number of articles that non-paying readers can access online for free before they are asked to subscribe.

Mr Kavanagh said The Irish Times would continue to make adjustments to the online meter in future, and that this might include loosening it during some news periods. It is also looking at reserving premium content for subscribers only.

Contract printing revenue slipped 1.5 per cent in 2015 due to a decline in volume following the closure of the Metro Herald in December 2014. This was partially offset by the addition of revenue from new contracts signed towards the end of the year.

Total costs, before exceptional items, rose 2 per cent in 2015. The increase was mostly due to investment to support digital content growth and the launch of digital subscriptions.

The group’s payroll costs increased by almost €3.8 million to €37.6 million, with staff numbers rising from 423 to 444. Reorganisation costs, which included the cost of redundancies, came to €1.9 million.

Subsidiaries of The Irish Times Ltd include property website MyHome.ie, training company Itronics and website publisher DigitalworX Limited, while it owns 50 per cent of Gloss Publications Ltd. It also has a 31.7 per cent share in Entertainment Media Networks Limited, the company behind Entertainment.ie.

Finance ministers gather as fears grow even the future of the euro zone is at risk 20:50
Oceans of learning when you dive into the marine website 19:04
Global stocks higher as investors eye euro-zone finance ministers 18:15
Ibec chief says 10% jobless rate at year end would be ‘great achievement’ 18:08
Markets inch higher as sentiment remains fragile 18:03
Search executive
jobs on irishtimes.com