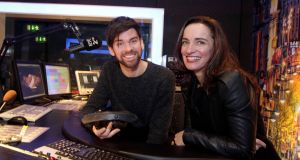 Takeaway app company Just Eat is to sponsor Eoghan McDermott’s drivetime show on 2fm from Monday in an eight-month deal.

Just Eat will put its name to The Eoghan McDermott Show in a deal that includes 45 credited stings a week on the RTÉ national station as well as podcast and homepage sponsorship and other promotions.

McDermott began presenting the 4pm-7pm show in August 2015 and, according to the latest available figures, he has 109,000 listeners.

The company also sponsors television series First Dates on RTÉ2, while it has been a sponsor of the Electric Picnic music festival for the past three years.

In Ireland, Just Eat now has more than 1,900 takeaway restaurants on its service, while the Just Eat app has been downloaded more than 800,000 times.

More than 80 per cent of its customers now order food via the app and on mobile devices, rather than through the desktop website.

The London-based company was founded in Denmark in 2001 and now operates in 13 markets worldwide.

It recently rebranded with the aim of highlighting the range of cuisine types available through its service. It uses the slogan “find your flavour” to spread what it calls its “food discovery message”.

Europe’s largest takeaway ordering platform by sales is now bidding to shift how consumers view takeaway food from a weekend “treat” to an everyday convenience.

In January, the FTSE 250-listed group reported that sales rose by more than a third in 2016, albeit at a slower rate of growth than in previous years.

The company has upgraded its profit forecasts three times for 2016 and five times in the past two years. It has faced increased competition of late from companies such as Deliveroo.