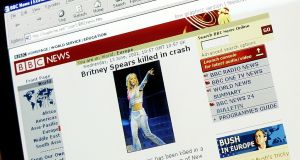 Fake news picked up by the BBC: Google reviewed 550 sites suspected of misrepresenting content to users, with some of these found to be “impersonating” news organisations

Google removed 1.7 billion ads that violated its advertising policies last year – more than double the tally for 2015 – and kicked almost 200 websites off its advertising network for misrepresenting who they are and publishing “deceptive content”.

The Silicon Valley giant’s clampdown on “bad actors” in its advertising network also saw the suspension of more than 1,300 accounts for “tabloid cloaking”, a scam where advertisers game the Google system with fake headlines in order to sell weight loss products.

Scott Spencer, Google’s director of product management for sustainable ads, said 2016 had seen the rise of “cloakers” that take advantage of hot topics such as a government election, a trending news story or a well-known celebrity.

“Their ads can look like headlines for real articles on a news website. But when people click on that story about Ellen DeGeneres and aliens, they go to a site selling weight loss products,” he wrote in a Google blog post published on Wednesday.

Mr Spencer said this type of “bad ad” was gaining in popularity because people were clicking on them.

“A handful of scammers can pump out a lot of bad ads: during a single sweep for tabloid cloaking in December 2016, we took down 22 cloakers that were responsible for ads seen over 20 million times by people online in a single week.”

Separately, Google reviewed 550 sites suspected of misrepresenting content to users, with some of these found to be “impersonating” news organisations.

“We took action against 340 of them for violating our policies, both misrepresentation and other offences, and nearly 200 publishers were kicked out of our network permanently,” Mr Spencer wrote.

Like Facebook, the tech behemoth found itself caught up in the “fake news” controversy in 2016. Sites that trumpeted falsehoods were found in some instances to rank highly in Google’s search results.

The company said it had long-standing policies prohibiting advertisers from running ads on sites that help people deceive others. It gave the example of a site that sells fake diplomas.

Google admitted, however, that in 2016 it “saw a need” to step up its war against “misrepresentative content”, with a new policy aimed at taking action at deceptive websites introduced in November.

The firm employs a team of engineers, policy experts and product managers to wage what it calls a daily fight against misleading, inappropriate or harmful advertising – an activity that it said could become “a cat and mouse game”.

In 2016, Google expanded its efforts to protect users from misleading and predatory finance offers, with a ban on ads for payday loans from July 2016 resulting in the disabling of more than five million such ads in six months. Some 8,000 sites were suspended from its ad network for this reason.

Its systems also detected a “significant increase” in ads for illegal pharmaceutical products and it disabled 68 million of them, up from 12.5 million in 2015. More than 17 million ads for unauthorised gambling promotions were also taken down.

Google said it had made an effort to identify and eliminate bad ads faster than it had before. Mr Spencer said its systems disabled 112 million or six times the previous year’s volume of “trick to click” ads, which is where users are deceived into clicking on ads that look like system warnings, but in fact trigger the downloading of harmful software.

“Ultimately, bad ads pose a threat to users, partners, and the sustainability of the open web itself,” he wrote.