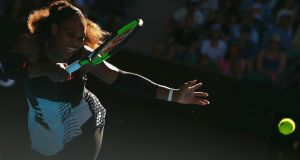 Eurosport has this month been broadcasting live coverage of the Australian Open tennis tournament, where Serena Williams is set to meet her sister Venus in the final. Photograph: Reuters

Sky customers in Ireland may lose access to Eurosport and up to a dozen other channels owned by Discovery Communications from next week if a pricing dispute between the two companies is not resolved.

Discovery said negotiations with Sky for a new carriage deal reached an impasse, threatening a blackout of Discovery channels from Sky’s platform.

A ticker is running across the bottom of the Eurosport 1 and 2 channels informing viewers of the potential loss of the channels to Sky customers, while Sky’s website states that the Discovery portfolio of channels is “unlikely” to be available in its television packages from February 1st.

The row, if not resolved, will affect some 5.5 million subscribers to Sky’s television platform in the UK and Ireland.

Sky finds the price expectations for the Discovery portfolio to be “completely unrealistic”, a representative for the pay-TV company told Reuters.

“Discovery’s portfolio of channels includes many which are linear-only where viewing is falling... We have been overpaying Discovery for years and are not going to anymore.”

Sky has decided not to renew its contract on the terms offered by Discovery, the representative added.

Discovery said it is now paid less by Sky than it was a decade ago. The Silver Spring, Maryland-based Discovery is backed by Irish-American billionaire John Malone, chairman of Virgin Media’s parent company Liberty Global.

Through Eurosport, Discovery has been more aggressive in bidding for sports television rights in recent years, with the company controlling the rights to the Olympic Games throughout much of Europe from 2018 to 2024.

The sports network has over the past fortnight been broadcasting live coverage of the Australian Open tennis tournament in Europe.

The pay-TV and broadband company published half-year results on Thursday that showed its revenues increased 5 per cent in the UK and Ireland in the second half of 2016, arriving at £4.27 billion (€5 billion) for the six month period.

Sky does not break out figures for its Irish business. Across Europe, revenues climbed 12 per cent to £6.4 billion (€7.5 billion).

Its operating profit of £679 million (€799 million) was down £65 million (€76 million) on the same period in 2015 as a result of higher costs relating to its English Premier League rights deal.

“In a year in which we are absorbing significantly higher programming costs, as a result of the step up in Premier League costs, our financial performance has been good,” said Sky chief executive Jeremy Darroch.

Mr Darroch said Sky continued to build up its European television production studio, with 100 original series going into production this year, while it also plans to introduce its targeted advertising service, Sky Adsmart, in the Irish market.

But the company, which has the European rights to US dramas like Game of Thrones, Girls and the forthcoming Twin Peaks, also highlighted “higher than planned” rate of churn – the frequency with which it is losing customers - in the UK market.