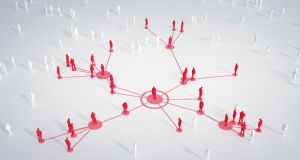 Politicians are increasingly hiring private companies to spread disinformation online, according to researchers who found campaigns run by third-party contractors targeting 48 different countries over the past year.

The OII said private contractors help to identify which groups to target with messages, and then “prompt the trending of certain political messages” either through fake accounts or with armies of bots, or automated accounts.

Researchers said they had found evidence of at least $60 million (€49 million) of spending on such campaigns since 2009, although the real total may be far higher.

Hiring a third party to spread disinformation allows political groups to keep themselves at arm’s length. For example, Facebook said last year that it found some “co-ordinated inauthentic” online activity likely linked to Turning Point USA, a pro-Donald Trump youth campaign group, and carried out by Rally Forge, a marketing firm, ahead of the US election.

Facebook banned Rally Forge from its platform, but Turning Point escaped any penalties. Rally Forge did not immediately respond to a request for comment and did not comment on its ban at the time.

The report included the relabelling of the UK Conservative party Twitter account as “factcheckUK” during a political debate ahead of the 2019 general election as an example of “party-led disinformation”. It noted that the digital communications firm Topham Guerin had been hired by the Conservatives after its success in the Australian election earlier that year.

Several campaigns stretched across borders. The Canada-based PR firm Estraterra was banned by Facebook after it found a campaign that spanned El Salvador, Argentina, Uruguay, Venezuela, Ecuador, and Chile. Topham Guerin and Estraterra did not immediately respond to a request for comment.

“For a long time our perception of propaganda and disinformation was that they come from governments,” said Sam Woolley, a professor focused on propaganda research at the University of Texas at Austin, “rather than considering the fact that they are part of a commercial enterprise.”

“What we’ve realised is that many of the firms that build online disinformation are based in democratic countries as well,” Mr Woolley said, adding that many use marketing jargon such as “reputation for hire” to disguise their activities.

“The level of sophistication has certainly increased,” said Oumou Ly, a fellow at Harvard’s Berkman Klein Center who studies disinformation. Techniques include buying up comment space, artificially linking keywords to search terms to boost visibility and “narrative laundering”, in which media is created to give existing stories more credibility.

Some 317,000 accounts and pages have been removed by Facebook and Twitter between January 2019 and November 2020, the research found. The OII said it had found private contractor-run disinformation campaigns targeting 25 countries in 2019, showing the scale of the increase. – Copyright The Financial Times Limited 2021