One Boston-based hedge fund has built up a 2.75% interest in the media group 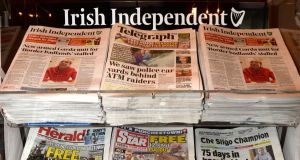 Mediahuis has taken steps to ensure its takeover of INM will go through by mopping up a 29.9 per cent stake. Photograph: Dara Mac Dónaill

Two funds have moved to take advantage of Independent News & Media (INM) trading at a discount to the €146.5 million takeover price it has agreed with Belgian company Mediahuis, by placing leveraged bets on the deal.

Weiss Asset Management, a Boston-based hedge fund run by former Bell Labs mathematical economist Andrew Weiss, disclosed on Thursday to the Dublin stock market that it had built up a 2.75 per cent interest in INM through financial derivatives called contracts for difference (CFDs).

The most recent trades had been at 10.2 cent per share, a discount to the 10.5 cent price INM agreed last week to be acquired by Belgo-Dutch publishing group Mediahuis.

Separately, Franco-German financial firm Oddo BHF’s asset management arm has also accumulated a 1.5 per cent exposure to INM, with a third of its interest held by way of CFDs.

CFDs are financial contracts that allow investors to place a bet on a stock rising – or, sometimes, falling – in value for an initial outlay of as little as 5-10 per cent of the share’s value. It’s similar to a homeowner buying a house with a small deposit and borrowing the remainder.

CFDs are a favourite way for hedge funds other opportunistic asset managers to profit from mergers and acquisitions. Merger arbitrage exploits the fact that shares often trade in the market at a discount to an agreed takeover price, reflecting the fact that the deal may have execution risk.

Mediahuis has taken steps to ensure its takeover of INM will go through by mopping up a 29.9 per cent stake.

Most of the stake has come about by Mediahuis buying more than half of the combined 45 per cent holding in Ireland’s largest newspaper publisher from businessmen Denis O’Brien ad Dermot Desmond. Both men have pledged to sell the remainder of their INM stock to Mediahuis as the takeover is completed.