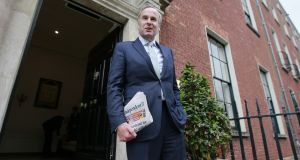 Belgo-Dutch newspaper publisher Mediahuis has increased its stake in Independent News & Media (INM) to 29.9 per cent, further cementing its position after agreeing to acquire the Dublin-based company for €145.6 million.

Mediahuis disclosed on Monday that it had bought out its chairman Thomas Leysen’s personal 1 per cent interest in INM, which had been built up before the deal was announced. It also acquired two other batches of stock in the company, according to stock exchange disclosures under takeover rules.

Mediahuis acquired an initial 26 per cent holding in INM last Tuesday as businessmen Denis O’Brien and Dermot Desmond sold more than half of their combined 45 per cent holding in Ireland’s largest newspaper company. Both men have committed to selling on the remainder of their holdings to Mediahuis under the terms of the agreed takeover, unveiled last week.

A stake of more than 25 per cent has given Mediahuis the voting power to block any rival bidder from mounting a takeover offer under a similar structure.

Mediahuis is seeking to carry out the transaction by way of a so-called scheme of arrangement, which requires the approval of shareholders representing at least 75 per cent of the value of INM’s shares.

Subject to receiving such support at an extraordinary general meeting and requisite High Court approval, the Belgium-headquartered company could then force holdout shareholders to sell their stock to it.