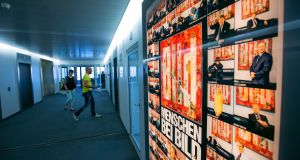 German media group Axel Springer reported lower sales and earnings in the first quarter, after a strong performance from its online classifieds business failed to offset the weakness of its news media division.

Group sales in the three months fell slightly to €771.8 million, while net income dropped 35 per cent to €55.4 million. Adjusted earnings before interest and tax fell 7 per cent to €113.4 million. Springer’s results were slightly ahead of expectations, according to a Reuters poll of analysts.

The group said the decline in profits was in part due to “consolidation effects”, following last year’s sale of aufeminin, a French online portal aimed at female users. Those effects, it added, should lessen as the year progresses.

Springer announced last week that it was selling its majority stake in @leisure, a Dutch holiday rental booking company, to India’s Oyo group for €370 million. As a result of that transaction, the German group said it was lowering its 2019 guidance. Group revenues would now be flat and adjusted ebit would decline more than expected. Springer had previously forecast a slight rise in revenues for the full year.

Springer is best known as the owner of media brands such as Bild, Germany’s top-selling daily, the conservative broadsheet Die Welt, and online sites such as Business Insider. It makes the bulk of its profits from online classified ads, on sites such as StepStone and Immowelt. Springer’s classifieds unit recorded adjusted core earnings of €91 million for the first quarter, compared with €30 million from news media and €19.2 million from marketing.

Mathias Döpfner, the Axel Springer chief executive, said in a statement: “The first-quarter results show that digital classifieds and digital journalism are delivering significant growth for Axel Springer. We will invest more heavily in the potential of growth companies in these areas in the future compared to previous years.” – Copyright The Financial Times Limited 2019