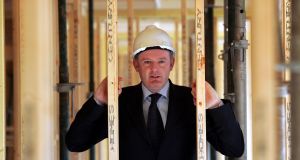 Entekra, the house builder set up by Gerry McCaughey of Century Homes, will create 500 jobs in the US after signing a deal there for an advanced factory. Photograph: Eric Luke

McCaughey’s Entekra builds in California Entekra, the house builder set up by Century Homes Gerry McCaughey, will create 500 jobs in the US after signing a deal there for an advanced factory, The Sunday Independent reported.

Entekra makes the buildings’ frames and components and assembles them on site. The company has secured a $4.75 million tax credit from the state of California to build an automated factory for this process in Modesto. It will be operating by May and employ 250 people building 3,000 homes a-year.

“We will also be opening a second factory in southern California in 2020 that will employ a further 250 staff,” Bran Keogh, Entekra chief operations officer, told the newspaper.

Vince Power to bring Liverpool Feis to the US Promoter Vince Power hopes to take his Liverpool Feis idea to the United States in the near future and believes it has the potential to be a success in Canada, Australia and New Zealand also, according to the Sunday Business Post.

Power is organising the feis, featuring Van Morrison, Imelda May and the Coronas at Pier Head in Liverpool, the place where boatloads of Irish immigrants to the city once docked.

He told the newspaper that he hopes to replicate the concept in the US and further afield. “There is huge potential to take it further. You could do Feis all year round in Australia, New Zealand and Canada,” he said.

Power sold his Mean Fiddler Group in 2005 for £38 million. He has had several ups and downs since then, losing his Vince Power Music Group and seeing his Music Festivals Group go into administration.

“O’Coineen confirmed that Kilcullen was the preferred bidder but said no deal with owner Key Capital was finalised yet,” the Sunday Times said.

Mr O’Coineen told the newspaper that Kilcullen was interested in acquiring the business. He said that his company wanted to invest in the Sunday Business Post and “bring it to its next stage of development”.

Bank of Ireland intends working with one of the market’s existing players, VHI, Laya Healthcare or Irish Life Healthcare, rather than becoming an underwriter in its own right, the newspaper said.

The move mirrors a similar approach taken by AIB, which took a 30 per cent stake in a health insurance joint venture with Aviva that was sold in 2016 to become Irish Life Health.