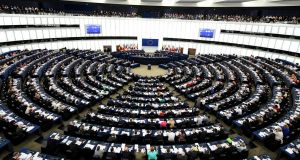 The European Parliament in Strasbourg. Members of the parliament on Thursday opted to reject a copyright law which now has to go back to tripartite discussions. Photograph: Patrick Seeger/EPA

The European Parliament has narrowly voted to reject draft reforms to the EU’s copyright laws, delivering a partial victory for campaigners including Google and Wikipedia that say the rules will severely restrict internet freedom.

MEPs decided to stop progress in negotiations on an update of the EU’s copyright directive, designed to give news publishers and other media fairer fees from internet giants.

The update would be the first since 2001 and the plan to revise copyright rules for the digital age has produced one of the fiercest battles fought over EU tech policy, with lobbying from opponents led by internet giants and the backing of figures such as Tim Berners-Lee. Those in favour of the plans, which have been over two years in the making, include publishers as well as Paul McCartney, the former Beatle, and others in the music sector.

One of the most contentious aspects of the plan rejected by MEPs would have required internet platforms – notably YouTube, which is owned by Google – to use content filters, so that material uploaded by users did not breach copyright rules. It would have also meant that search providers such as Google could have been asked to pay publishers for showing brief clips of content.

A petition against the reforms called “Save Your Internet” has gathered more than 700,000 signatures in recent weeks. Wikipedia, which has run banners on its French, Spanish and Italian sites urging its users to press MEPs to reject the reforms, would have been exempted from the filter obligations.

MEPs will now have to rework the intended regulations before a fresh vote in September. Should a compromise be reached, the parliament would negotiate with EU governments and the European Commission on a final text.

The commission proposed a revamp of its copyright rule in 2016 to help redress the balance between content creators – such as newspapers and magazines – and internet companies on whom they increasingly rely to support their business models.

Supporters of tougher EU copyright laws argue that Europe’s publishers and creators need greater protection from US internet giants during a time of transatlantic tension over trade.

“It is inexplicable how some people want to support internet capitalism when others are calling for ‘America First’ and exploiting our creative industries. We should be standing at the side of Europe’s creatives,” said Axel Voss, the centre-right MEP in charge of agreeing a compromise, ahead of the vote.

Anders Lassen, president of the European Grouping of Societies of Authors and Composers which backed the reforms, said the vote was a missed opportunity. “This vote was never about censorship or freedom of speech. It was only about updating the copyright rules to the 21st century and ensuring that creators get a fair remuneration when their works are used in the digital space,” he said.

Maud Sacquet, policy manager at the Computer & Communications Industry Association, which represents Google and Facebook and lobbied against the reforms, said: “The parliament has now an opportunity to adopt balanced and future-proof copyright rules, an important step to achieve a real, thriving digital single market.”

Andrus Ansip, vice-president of the commission in charge of digital policy, said it was time for both sides of the campaign to “stop the lobby slogans and start looking for a solution”.