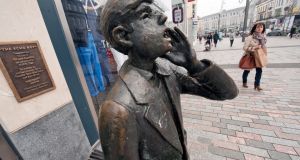 The Echo Boy statue in Cork. The Evening Echo became famous for the group of boys who distributed it on the street. Photograph: Michael Mac Sweeney / Provision

Cork’s Evening Echo is to become a morning newspaper and will officially be known only as the Echo from March.

The Irish Times, the daily newspaper’s owner, is making changes to the distribution of Examiner Group titles that will result in the Evening Echo being produced and printed at the same time as its sister newspaper, the Irish Examiner, employees were told on Thursday.

The Echo’s website was this week rebranded Echo Live or echolive.ie.

Consultation documents were issued to staff that may be redeployed or take voluntary redundancy as a result of the move. It is understood that the change will result in cost savings to the group.

The Evening Echo, founded in 1892, became famous for the “Echo Boys” who distributed it on the street. It is expected that some on-street selling will continue after it becomes a morning title.

The newspaper is currently available to readers from about midday.

The title had a circulation of 9,011 in the first half of 2018, the most recent period for which audited figures are available.

A marketing campaign will be launched to promote the rebranding in early March, at which point Newspread will begin distributing all Examiner Group titles.

Newspread, which is also the distributor for The Irish Times, is owned by Independent News & Media (INM).