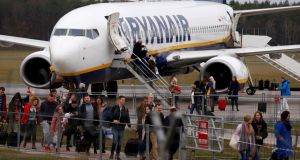 Ryanair is drawing up cost-saving measures that could lead to job losses, according to the Sunday Independent. Photograph: Kacper Pempel/File Photo/Reuters

Ryanair is drawing up cost-saving measures that could lead to job losses, hit staff and recruitment, slow fleet growth and see the airline renegotiate airport contracts, according to an internal memo, the Sunday Independent reports.

The memo warned of a 10 per cent fall in expected profits and contained a warning regarding a detailed cost-cutting review.

It is reported that aviation entrepreneur Ulick McEvaddy has held discussions with international aviation giants IAG – which owns Aer Lingus and British Airways – and American carrier Delta about establishing new hubs for their operations at his proposed new Dublin Airport terminal.

Mr McEvaddy met IAG boss Willie Walsh and former Aer Lingus chief Stephen Kavanagh and discussed the possibility of either British Airways or Aer Lingus, or both, becoming the anchor tenant at the terminal, the newspaper reports.

The Sunday Business Post reports that one of the world’s biggest mutual funds has been quietly selling down its stakes in several well-known Irish companies, including Cairn Homes, Bank of Ireland, Smurfit Kappa, Tullow Oil and Hostelworld, stock exchange filings show.

The Capital Group is a Los Angeles-based mutual fund with nearly $2 trillion (€1.75 trillion) in assets under management and has been for the last year reducing the size of several of its Irish equity holdings.

Agriculture and forestry have emerged as two key sectors making extensive use of Ireland’s work permit system as the labour market continues to tighten, according to the Post. In previous years agriculture, forestry and fishing were using fewer that 200 permits but this has now risen to almost 1,000 in just a year.

The pension arrangements of up to 100,000 directors and senior staff have been plunged into chaos after the State decided one-member schemes must meet the same governance standards and investment controls as much larger occupational schemes, according to the Sunday Times.

The Department of Social Protection confirmed there would be no derogation from new EU rules for bespoke executive pensions and self-administered schemes that are often used by family-owned companies and typically have one member.

Neuromod, a healthcare start-up developing treatments for tinnitus, is in talks to raise up to €24 million in investment, the Times reports. Accounts filed for the business state that the directors are in “advanced discussions with third-party investors” and are confident of securing the €24 million in the coming months.