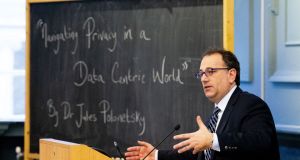 People who are interested in the intersection of technology, data protection and privacy issues need to be at the table now to determine the future of smart cities, self-driving cars and how genetic data is used, a leading privacy lawyer told an event in Dublin on Monday.

Dr Jules Polonetsky, chief executive of the Washington-based Future of Privacy Forum gave a public lecture entitled ’Navigating Privacy in a Data Centric World’, which was hosted by the ADAPT Centre for Digital Content Technology at Trinity College Dublin.

The event coincided with Data Protection Day, which is marked annually on January 28th.

Dr Polonetsky spoke about how “the rapid evolution of digital technologies has thrown up social and ethical dilemmas that we have hardly begun to understand”.

Speaking about connected cars, smart cities, consumer genetic testing, facial recognition and education, he examined the potential benefits but also the ethical and privacy challenges thrown up by such technologies.

He addressed how the EU’s General Data Protection Regulation might shape the development of data-intensive technologies and also spoke about proposed new privacy legislation in the US.

This year at the Consumer Electronics Show in Las Vegas he said he had seen very little in the way of gadgets that were “groundbreaking and new”. But the biggest change was that everything now had Google Assistant or Alexa’s voice assistant built in.

On smart cities, he said Los Angeles now viewed itself as a “platform”, where everything was analysed to see how services were working.

Dr Polonetsky said that obviously the privacy consequences were “interesting and challenging” and covered areas such as whether law enforcement got access to the data, whether surveillance was enabled and the role of marketing.

He said people were coming to such issues with a “real passion for solving real societal challenges”.

“It behoves all of us to figure out how to put the rules in place that facilitate those goals while ensuring that we are not building an Orwellian society as we facilitate those goals. That’s going to be really hard because there really are some challenges here and we need to come up with the right designs and balances and structures,” he said.

On DNA testing and genetics, Dr Polonetsky noted that on the one hand such technologies made it possible to learn how people living in a particular area were coming down with particular diseases, but on the other it was possible to see how data could be used against “entire classes of people”. This was a challenge to ethics.

He also noted the challenges posed by direct-to-consumer genetic testing. “We have started to see law enforcement eager to access some of these databases to capture killers and rapists, both showing what can be achieved but also showing the fact that the purchase of data, including data in one of these open databases, mean that your relatives and anybody connected to you is part of a database accessible to the police,” he said.

The Future of Privacy Forum brings together industry, academics, consumer advocates and others to explore the challenges posed by technological innovation and to develop “privacy protections, ethical norms and workable business practices”.