Vote for industrial action at airline on July 12th 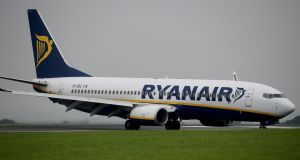 Industrial unrest at Ryanair that threatens to disrupt thousands of Irish passengers could spread to some of the airline’s other European bases.

Irish-based Ryanair pilots plan a one-day strike on Thursday, July 12th, in a dispute over seniority, a move potentially hitting thousands of holidaymakers at the Republic’s airports.

According to German pilots union VC, its members in Ryanair are voting on a possible strike in a ballot that will run to the end of July, following what it called the failure of talks on improved pay and conditions.

Trade union sources suggested on Tuesday that pilots in other European countries including the Netherlands and Sweden could follow suit.

Some 94 out of 95 members of the Irish Airline Pilots’ Association (Ialpa) – part of trade union Fórsa – in Ryanair voted on Tuesday to strike.

They want a seniority agreement with Ryanair covering base transfers, promotion, annual leave and any other issue governed by length of service.

“Ryanair has invited Fórsa to meet to discuss these proposals on 18 separate occasions but Fórsa have failed to reply or take up any of these invitations to meet,” it said.

Eddie Wilson, Ryanair chief people officer, wrote to Fórsa official Angela Kirk seeking a meeting to discuss the issue. Each side stressed it was willing to engage with the other.

Ryanair has pledged to contact customers next Tuesday should the July 12th strike go ahead.