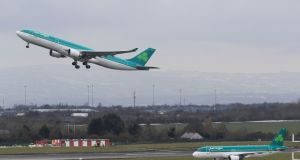 Aer Lingus filled more seats on its planes than its group colleagues did in June. Photograph: Nick Bradshaw

Aer Lingus grew its passenger revenue 11.4 per cent last month, a slight fall in revenue growth compared to the previous month, according to figures published by its parent, International Airlines Group (IAG).

The figures show the number of passengers carried by its four airlines - Aer Lingus, British Airways, Iberia and Veuling - in June increased 8.9 per cent to 10.6 million compared to the same month last year.

Aer Lingus grew revenue passenger kilometres by 13 per cent in June and by 9.2 per cent in the first six months of the year.

The Irish carrier filled more seats on its aircraft than the same period last year with load factor reaching 89.1 per cent, compared to 86.9 per cent in 2017.

Aer Lingus’s load factor was ahead of the group as a whole which recorded a load factor of 87.4 per cent in June. It was also higher than the three other carriers in the group.

In June, IAG launched its new shorthaul low-cost Austrian subsidiary, LEVEL, with flights due to begin this month. The new subsidiary will base four aircraft in Vienna from where it will fly to 14 European destinations.