Rancour at Ryanair, rainy day funds and how a hard Brexit is going to hurt 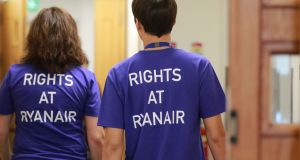 Deadlock over a meeting venue is stalling talks on a possible resolution to next week’s strike at Ryanair from going ahead, it emerged yesterday. Barry O’Halloran reports on the latest in the increasingly rancorous dispute, while in Agenda he assesses whether Michael O’Leary is the right man to lead the airline into a unionised era.

After months of tension and disagreement, Theresa May is gathering her ministers at her country retreat, Chequers, hoping to agree a UK proposal on how future relations should work, and prevent a cabinet revolt. Whatever about the political risks for May, the risks for the Republic are underlined in two reports this morning. The first reveals how our grocery sector could be the hardest hit from Brexit with more than two-thirds of products on Irish supermarket shelves either manufactured in the UK or imported through Britain. The second outlines how more than half of the imported materials used by Irish-owned firms to produce final products are sourced in the UK.

The World Cup and the summer heatwave is benefitting Irish drinks manufacturer C&C it seems. In an update at its agm on Thursday, it said both events had helped trading across its key markets, with Bulmers returning to growth in Ireland.

It’s not all good news on the drinks front, particularly for beer drinkers, as both Diageo and Heineken have sent out letters to publicans, wholesalers and retailers advising them of price increases.

Seeking to answer Dublin’s limited hotel capacity, it seems some are taking to the Liffey. A former CIÉ transport ship, bought by its current owner for €1 in 2015, will become home to luxury five-star accommodation berthed at Dublin’s Custom House Quay.

The European Parliament yesterday evening narrowly voted to reject draft reforms to the EU’s copyright laws, delivering a partial victory for campaigners including Google and Wikipedia that say the rules will severely restrict internet freedom.

This month’s Irish Times Businessperson of the month, in association with KPMG, is Peter Jackson, chief executive of Paddy Power Betfair. The company has struck two deals in recent weeks that will position it to be amongst the first European beneficiaries of a federal court ruling lifting a ban on sports betting in most US states.

In his economics column this week, John FitzGerald argues that we need to put more than the proposed €500 million into a “rainy-day” fund.

In World of Work, Olive Keogh tackles the thorny issue of public speaking, offering up some tips to overcome those nerves.

Finally, the deadline for The Irish Times Innovation Awards is 5pm this evening. If you have an innovative service or product that deserves greater recognition and reward make sure you get your entries in today.