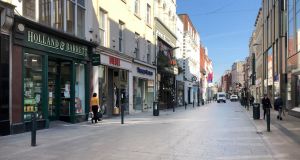 Grafton Street: many retail rents, for the second quarter of the year, are due on Wednesday. Lobby group Retail Excellence say many stores will not be able to pay this bill. Photograph: Bryan O Brien

Dublin software company Workhuman, formerly known as Globoforce, has sold a 10 per cent stake in the business in a deal that puts it “on course for” for a €1 billion valuation, says the Sunday Times. UK-based Intermediate Capital Group bought into the company in a share placement to allow some of its early backers to sell down their stakes.

The Sunday Times also reports that Bank of Ireland and PTSB have started turning down house buyers who seek to borrow more than three-and-a-half times their earnings, in an early signal of how institutions may ration lending following Covid-19. PTSB has issued a blanket ban on all applications for exemptions from the Central Bank lending rules, while BOI has tightened its criteria.

Jobbio, a recruitment consultancy backed by Dermot Desmond and Michael Chadwick, has received a buyout approach from a US group, the Sunday Times reports. The buyout approach was received this year, although talks have paused during the Covid-19 crisis. Other backers of Jobbio include Michael Smurfit, Tony Smurfit and tech investor Barry Maloney.

Bord Bia chief executive Tara McCarthy says the Irish meat market has seen at least a third of its €1 billion sales in the UK wiped out overnight due to the the closure there of restaurants and pubs. The food agency boss told the Sunday Independent that there is no guarantee that the business will return.

The Sunday Independent also reports that retailers are seeking up to €300 million in rent supports. The paper writes that many retail rents, for the second quarter of the year, are due on Wednesday. Lobby group Retail Excellence say many stores will not be able to pay this bill and some will take up to three years to recover from the Covid-19 crisis.

A survey by property portal Realli says almost half of Irish home buyers will delay their purchases due to the economic uncertainty caused by the pandemic. Of those who choose to delay, as many as one-in-six said they could wait up to six months before committing to buying a home, the Sunday Independent reports.

Mobile phones data to be used in Covid-19 fight

The Sunday Business Post reports that mobile phone usage data will be used to fight Covid-19 in Ireland. It says members of the public will be asked to opt in to a tracing app as part of plans being drawn up by the HSE.

The Post also reports that Larry Goodman is to take sole control of the Hermitage private hospital in Lucan on the outskirts of west Dublin. His companies have notified the competition regulator of his intention to take control. The move to take control comes after its chief executive stepped down following a dispute with Goodman, who was a minority investor.