Company also owns the Daily Star, the Daily Express and several other brands 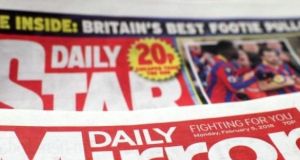 Daily Mirror-owner Reach on Thursday forecast a big hit to annual revenue as newspaper circulation as well as ad and digital sales were hammered in April by Britain’s move to impose a strict lockdown.

The company, which also owns the Daily Star, the Daily Express and several other brands, said it had seen an estimated 30 per cent slump in April sales from a year earlier.

“While in some areas we have recently seen a stabilisation in trends, circulation remains significantly below pre-Covid-19 levels and advertising remains very challenging and uncertain, with regional advertising particularly impacted,” Reach said.

The company said last month it would furlough 20 per cent of its staff, cut wages by 10 per cent and management pay by 20 per cent as it tries to keep its regional and national titles operating during the pandemic.

It had also warned that the uncertainty around the severity and duration of the crisis casts a shadow on the impact of print circulation, advertising and events.

The company said it had net cash of £33.2 million after cutting costs and drawing down £25 million.

In the four months to April 26th, revenue fell 13.1 per cent, despite a 4.7 per cent growth in digital sales for the period.

However, digital revenue for April, which represents a full month of impact from the nationwide lockdown, dropped nearly 23 per cent.