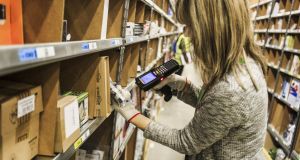 Some stock brokers have had to put new customers on a waiting list, as “armchair investors are rushing to open trading accounts in the hope of picking up bargain stocks” due to Covid-19, reports the Sunday Times. Davy has reported an “uptick in new account inquiries” while Dutch discount broker DeGiro, favoured by many retail investors here, is running a waiting list.

The Sunday Times also reports that Amazon has leased its first e-commerce warehouse in Dublin and is finalising plans to rent more space in the capital to allow for a significant expansion of operations. It has opened a 6,800sq m (73,194sq ft) “delivery station” at Greenogue Business Park in southwest Dublin with 20 staff, the first time it has directly hired workers here to handle online orders.

Cityjet, an airline that has entered examinership, potentially owes Revenue up to €40 million, the Sunday Times says. An accountant’s report drawn up prior to it seeking court protection from its creditors outlines contingent liabilities of €39.3 million to Revenue plus €7 million in customs charges in Finland and Sweden.

Irish chemist chain Hickey’s Pharmacy has had a row with property behemoth Hines over its rent on Grafton Street, according to the Sunday Independent. It reports that Hines sought full payment of Hickey’s €43,000 Grafton Street rent for April after the head of the group said it could only pay 10 per cent. Paddy Hickey wrote to politicians to describe Hines as “reminiscent of 19th century rack-renting landlords”.

The deputy governor of the Central Bank, Ed Sibley, has said on radio that the State must not burden taxpayers with the losses of landlords and banks, the Sunday Business Post reports. The newspaper suggests the comments “show a level of concern among policymakers”.

The Post also reports that An Post plans to launch a new “green loan scheme” for the retrofitting of houses to make them more energy efficient, and also for the purchase of electric cars. It will be part of a new “Green Hub” run by Sustainable Energy Authority of Ireland to provide project management and advice.