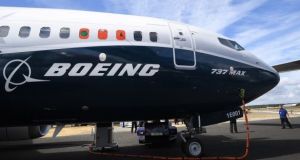 After the Pulitzer award was announced, Dominic Gates said: “Boeing now must not only fix the defects but also fix the culture that produced them.”

An Irish journalist has won the Pulitzer Prize for “groundbreaking” work on the two crashes of the Boeing 737 Max aircraft.

Dominic Gates from Dungannon in Co Tyrone led a team of journalists in the Seattle Times which reported on the crashes of the Boeing jet in Indonesia in October 2018, which resulted in the deaths of 189 people, and of the crash in Ethiopia in March last year with the loss of 157 people.

Mr Gates, who has been the newspaper’s aerospace reporter since 2003, drove the investigation into the shortcomings in the aircraft.

The Pultizer committee in its citation for the US national reporting award said Mr Gates and Seattle Times colleagues Steve Miletich, Mike Baker and Lewis Kamb had written “groundbreaking stories that exposed design flaws in the Boeing 737 Max that led to two deadly crashes”. “

Mr Gates was educated at St Patrick’s Academy in Dungannon and at Queen’s University, Belfast. After gaining a degree in mathematics he taught in Ireland and Zimbabwe, where he met freelance journalist Nina Shapiro, now his wife and fellow Seattle Times reporter.

After moving to Seattle in 1992, he started freelancing while working odd jobs. He then worked at the Industry Standard, a weekly IT business magazine, before joining the Seattle Times in 2003.

Mr Gates, after the award was announced, told his newspaper: “Boeing now must not only fix the defects but also fix the culture that produced them. I sincerely hope it will do so.”

He is the second Irishman this week to be awarded a Pulitzer Prize.

Limerick journalist Malachy Browne won a Pulitzer for being part of a New York Times team involved in “exposing the predations of Vladimir Putin’s regime”.