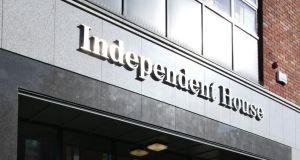 INM did not confirm whether it would appeal, but said it was considering the “action” it might take “in the interests of the company and its stakeholders”.

Leslie Buckley, former chairman of Independent News and Media (INM) and a nominee of its main shareholder Denis O’Brien, may be “guilty of misconduct and misfeasance” in his role at the newspaper group, according to a judgment from the president of the High Court.

Mr Justice Peter Kelly made the remarks on Tuesday as he decided an application by the Office of the Director of Corporate Enforcement (ODCE) for court inspectors to investigate a range of potentially “unlawful” conduct at INM.

These include concerns by the State watchdog that INM may have been run for the benefit of Mr O’Brien ahead of other shareholders when Mr Buckley, who resigned in March, was its chairman.

It also includes concerns that INM journalists’ emails may have been improperly accessed for data on people who have tangled in the past with Mr O’Brien.

INM opposed the application on the grounds that inspectors would be unnecessary and damaging. In his judgment on Tuesday, however, Mr Justice Kelly rejected its arguments and broadly accepted the justifications of the ODCE.

“I am satisfied that on the basis of the evidence which has been put before me that a number of incidents put forward by [the ODCE] are suggestive of the conduct of the company for an unlawful purpose,” said Mr Justice Kelly.

He said this was “particularly so” in the case of the allegedly improper and secret accessing of INM’s email servers, which the ODCE alleges was overseen by Mr Buckley and paid for by a company controlled by Mr O’Brien.

“Its actual purpose remains unclear but it is certainly suggestive of the company’s affairs being conducted for a purpose that is unlawful,” said the judge.

Mr Justice Kelly said other allegations, including that Mr Buckley wanted INM to overpay for a radio station that Mr O’Brien was selling, suggest “an unlawful purpose directed to the benefit of Mr O’Brien directly or indirectly”.

He also said texts between the two men suggested “a pattern of wrongful disclosure of price-sensitive information by Mr Buckley to Mr O’Brien”.

The judge agreed to put an effective stay on the appointment of the proposed inspectors – British lawyer Richard Fleck and Irish senior counsel Seán Gillane – until Thursday, to give INM time to consider the judgment.

INM did not confirm whether it would appeal, but said last night it was considering the “action” it might take “in the interests of the company and its stakeholders”. The ODCE, whose investigation was sparked by whistleblower complaints from INM’s former chief executive Robert Pitt, welcomed the judgment.

Mr Buckley said last night he would “robustly” defend himself. Mr O’Brien made no response to a request for comment on the judgment.