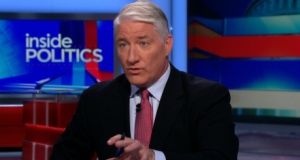 CNN’s John King: he is just one Key Race Alert away from being asked to run for our own presidency

Some people will say the definitive moment in the wake of the US presidential election came when Georgia turned blue, or later when Pennsylvania did, putting Joe Biden “on the verge” of the presidency, as the CNN chyron (American for television caption) had it.

But for fans of veteran CNN anchor John King, it might have arrived when Derry Girls screenwriter Lisa McGee tweeted “is @JohnKingCNN Irish yet?” and the Bostonian of Irish descent responded “always”.

King has been busy mesmerising viewers with his deft touch on the “magic wall”, an interactive map first used by CNN in 2008, when the historic triumph of Barack Obama led to a record year for US election night viewership.

One of a cohort of US broadcasters who appears to have evolved beyond sleep, King has impressed with his capacity to methodically explain why counting the mail-in ballots from pro-Democratic areas meant states were on track to change colour.

“We call it math,” he said, instantly sounding less Irish.

While King has won a new profile on this side of the Atlantic, news preferences in the US remain as polarised as the country itself. Nielsen ratings show that Fox News was the most-watched broadcaster on Tuesday night, with 13.6 million viewers in prime time, while CNN was second with 9.1 million.

It will be of no surprise to anyone that in the US’s partisan-by-design news culture, Fox News is more likely to be watched by people on the right, CNN by people on the left – a split that means these most popular of news brands are also the most distrusted.

Election night television viewing actually fell 20 per cent on 2016, reflecting serious news fatigue since Donald Trump’s dramatic victory four years ago and/or television’s faltering position in the media landscape. CNN, for its part, had its best-ever day on its digital properties on Wednesday, with 116 million visitors.

Either way, the analytical magic of blunt yet even-speaking King was not to be missed. By Friday he was one Key Race Alert away from being asked to run for our own presidency.

And really, it’s only a matter of time before The Late Late Show calls.