Commercial revenues declined 9% to €297m, as some sponsorship deals “at an advanced stage of negotiation before the pandemic” had fallen through 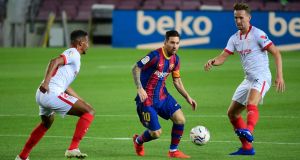 FC Barcelona, one of the world’s wealthiest football clubs, has revealed the massive impact of the coronavirus pandemic on its business, posting a €100 million pre-tax loss last season while more than doubling debt to €488 million.

The Catalan club, which has suffered a leadership crisis in recent weeks after its star player Lionel Messi demanded to leave, said annual revenues were €855 million last season. This was a 14 per cent fall from the previous year, when it earned more than any other club in the world.

Barcelona, one of the first elite European clubs to report financial results for the year covering the 2019-20 season, said on Monday it was hit by a coronavirus-induced income shortfall of just over €200 million.

Commercial revenues were down 9 per cent to €297 million, as some sponsorship deals “at an advanced stage of negotiation before the pandemic” had fallen through, with merchandise sales also dropping.

Match day revenues dropped 24 per cent to €162 million as spectators have been absent since March. Broadcasting income fell 17 per cent to €249 million, partly owing to fewer European matches because of the pandemic.

The club made €74 million worth of savings, including through agreed wage cuts for players, saying it “has not been immune to the outbreak of Covid-19, but its consequences have had a massive effect on the entire sports industry”.

Barcelona said it expected revenues to fall further to €791 million this season, though this projection is based on there being a gradual return of spectators to its Camp Nou stadium in December.

It is unclear when Spanish authorities will permit fans back into sports events, with European countries taking differing approaches to the issue.

Barcelona has also embarked on a redevelopment of its stadium, announcing a “new financing plan” to raise €815 million for the project. Goldman Sachs will manage a new vehicle that will pay investors a portion of the additional income expected to be generated by the club’s expanded ground, set to open in 2024.

In August, the team suffered a humiliating 8-2 defeat against Germany’s Bayern Munich in the quarter-finals of the Champions League, Europe’s top club competition, one of the worst losses in its history. The club has failed to win the tournament since 2015. - Copyright The Financial Times Limited 2020