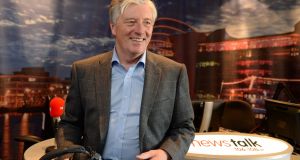 Newstalk presenter Pat Kenny: his firm’s wealth has soared since he moved from RTÉ to Newstalk in 2013.

Kenny and his wife Kathy are the only two directors and shared remuneration of €301,975.

The wealth of the firm has soared since Kenny’s move to Newstalk in 2013 from RTÉ as the broadcaster has mixed his radio work with TV work at Virgin Media.