May looks to tighten grip as Brexit looms 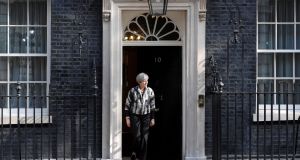 Just when you thought it was safe to take your eye off the UK, British prime minister Theresa May goes and calls a snap general election.

After months of wall-to-wall coverage of the ifs and buts surrounding Britain’s EU exit, it all seemed to be calming down following May’s triggering of the Lisbon Treaty’s article 50.

Then, on Tuesday, she surprised allies and opponents alike when she announced her plan to bring forward an election that was not due until 2020. The vote, she said, would strengthen her hand in divorce talks with the EU.

With the opposition in disarray, May wants to copperfasten her majority in parliament to avoid a clash of priorities in the sensitive final stages of the two-year Brexit talks.

“I believe that at this moment of enormous national significance there should be unity here in Westminster, not division,” she said.

Victory would give May a powerful mandate extending until 2022, long enough to cover the Brexit negotiations plus a possible transition period into new trading arrangements with the EU. The calling of the election gave sterling a boost, as investors reckoned that a stronger mandate would allow the UK government to negotiate a softer and less gradual Brexit. But with contradictory indicators from London and Brussels on how the talks might go, this one will run and run.

Meanwhile, the “will they, won’t they” saga on whether financial institutions will move from London to Dublin continues. In the latest development, London-based currency exchange operator LMAX Exchange, which signalled last October it would seek to set up an EU hub in Ireland as soon as this year, has stalled on a decision until 2019.

“Given the uncertainty around the outcome of the upcoming Brexit negotiations and whether the UK’s financial services industry would maintain its EU passporting rights, LMAX Exchange decided to pause the process of seeking regulatory approval in Ireland,” a spokeswoman for the firm said.

Brexit was also front and centre as the International Monetary Fund (IMF) published its half-yearly Global Financial Stability Report and held its spring meeting in Washington.

In the report, the IMF said Britain’s EU exit poses a risk to global financial stability at a time when it is already challenged by heavily-indebted US corporations, China’s credit bubble and weak European banks.

With banks likely to be the sector hardest hit by Brexit, the IMF said the costs of doing business would rise and regulation would become more complex. “The challenges stemming from Brexit could undermine financial stability in ways that are difficult to estimate or predict at this juncture,” it added.

Separately, the IMF said it expects the Irish economy to grow by 3.5 per cent in 2017 and 3.2 per cent next year. This is below the Department of Finance’s revised estimate of 4.3 per cent growth for 2017.

Despite the growth, structural problems such as low productivity growth and high income inequality “are likely to persist”, the IMF said.

Minister for Finance Michael Noonan was in New York before flying to Washington for the IMF’s spring meeting, as well as that of the World Bank. On the agenda was the state of the global economy and how to keep another post-crisis recovery from stalling.

A series of investor meetings was organised by the National Treasury Management Agency.

The housing crisis continues to dog the Government as new figures this week laid bare the extent of the dearth in supply, as property prices continue to rise.

Minister for Housing Simon Coveney indicated that about 35,000 new homes are needed every year to begin making a dent. He was responding to figures from the 2016 census published on Thursday, which revealed that total housing stock grew by just 8,800 (0.4 per cent) in the five years up to last year.

The overall rate of home ownership has declined to its lowest since 1971 and more than 62,000 holiday homes are lying empty in the State. The figures show a total of 2,003,645 houses and apartments were enumerated in the 2016 census in April last year.

Separately, the Central Statistics Office (CSO) published figures that show property prices rose by 10.7 per cent in the 12 months to the end of February.

The year-on-year increase was nearly three percentage points higher than the annual rate of inflation recorded in January and comes on the back of a string of indicators pointing to a pick-up in house prices in the first quarter of 2017.

Prices nationally rose by 1.5 per cent in February. In Dublin, where supply pressures are most evident, prices climbed by 8.3 per cent in the year to the end of February, having been as low as 2.2 per cent in September 2015.

Meanwhile, the State’s finance agency is seeking bids for the development and operation of six social housing sites.

The National Development Finance Agency (NDFA), an arm of the National Treasury Management Agency and responsible for public-private partnership (PPP) projects, is planning up to 560 housing units on the six sites.

The number of units per site at six developments across Co Dublin, Co Kildare, Co Wicklow and Co Louth will vary from 50 to 150, according to tendering documents, while the project is expected to run for 25 years.

In company news, almost 88 per cent of Ireland’s publicly-quoted firms reported earnings in recent months that either met or beat markets expectations.

On average, companies delivered 8 per cent earnings per share growth despite a slump in sterling against the euro impacting many companies.