Business and markets fret ahead of French presidential vote 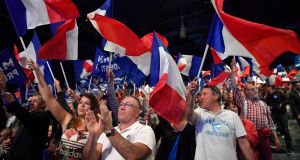 For Geraldine Emerson, the stakes couldn’t be higher as her French compatriots take to the voting booths on Sunday.

“As we’ve seen with Brexit and the election in the United States, everything is possible,” said Emerson, scion of a Loire Valley wine-making family in France who set up a craft cider business with her husband, Daniel, in west Cork at the height of the financial crisis.

“We’ve reached a point in the western world where something is happening. People feel the need for change and we can’t control anything.

“France is very divided on different levels – religiously, economically and culturally – and many people feel that they have been left out for too long by successive governments.”

The Emersons established the Nohoval cider company in 2010, naming it after the tiny townland near Kinsale where Daniel was born and raised.

Last summer, it secured a five-year contract to supply its premium Finnbarra dry Irish craft cider through a unit of Carlsberg all over France.

The deal is aimed at stoking demand for what was among the most popular beverages in France before the industry went into decline when many Normandy orchards were destroyed during the second World War.

“We just have to hope that whatever comes of the election, the economy will not collapse,” said Emerson.

She is not alone.

As France votes on Sunday in the first of two election rounds to choose the 10th president of the country’s fifth republic, polls have tightened to the extent that far-right candidate Marine Le Pen and far-left firebrand Jean-Luc Mélenchon could end up in a run-off ballot on May 7th.

Both have been campaigning on platforms of raising trade barriers and potentially exiting the euro.

However, Mélenchon, an admirer of the late Cuban revolutionary leader Fidel Castro and Venezuela’s former president Hugo Chavez, and whose support has almost doubled in the past month, has tried in recent days to soften his anti-euro rhetoric as his prospects of reaching the second round increases.

Deutsche Bank and Tokyo-based Nomura Holdings are among top investment banks that have advised clients to sell French government bonds heading into the election.

Meanwhile, more than 200 leading French business figures signed a letter that appeared in the Le Monde newspaper this week, urging voters not to be seduced by extreme candidates “selling illusions, false promises and impossible gifts”.

An early indication of investor nervousness came in February when the market interest rate, or yield, on France’s 10-year debt converged with that of Irish bonds for the first time since 2007, following a surge in France’s borrowing costs as opinion polls showed Le Pen gaining support.

The differential between both rates had been as wide as 11 percentage points in July 2011, when Irish bonds were trading at a yield of more than 14 per cent.

More significantly, the difference between French and German borrowing costs have widened from 0.57 percentage points at the end of last month to 0.73 points.

Le Pen’s populist anti-immigration and anti-EU stance is resonating with 22.5 per cent of voters, according to an Ifop-Fiducial poll published on Wednesday, half a percentage point behind support for 39-year-old centrist, Emmanuel Macron.

Meanwhile, former French prime minister François Fillon and Mélenchon are neck-and-neck at about 19 per cent.

Fillon is currently subject to a formal investigation into allegations he misused state money to give his wife and family fake jobs. Mélenchon has benefited most from momentum in recent weeks.

“A strong first-round result for Le Pen and/or Mélenchon would be considered to be a market-unfriendly outcome, as both have well-documented eurosceptic policies,” said Garret Grogan, global head of trading at Bank of Ireland Global Markets.

“The biggest risk to a victory for the conventional candidates appears to be fears of low voter turnout, as much of the electorate has been disillusioned with French politics.”

Financial markets – which have been caught out in the past 10 months by the surprise outcomes of the Brexit referendum and Donald Trump’s election as US president – will be keeping a close eye on the final opinion polls due to be released on Friday evening, and all-important exit polls which will be released at 8pm local time on Sunday.

The top two candidates will make it to the run-off vote next month.

Pierre Gattaz, the head of France’s largest business lobby, Medef, is clear about what would be the nightmare scenario.

“This Le Pen-Mélenchon second round can’t happen,” he said in a Europe 1 radio interview last week, as his organisation vowed to spend the remaining days before the first vote to explain the “dangers” of both candidates’ programmes.

The euro, which has fallen by almost 6 per cent in the past year against the dollar, is likely to decline by about 5 per cent to approach parity for the first time in a decade and a half should Le Pen win the presidency, according to a Reuters survey of foreign exchange strategists earlier this month.

“Election risk tends to lead to a binary reaction in markets, with there being no middle ground between extreme outcomes,” said Grogan.

“This has been particularly true recently, given the election surprises the market has experienced.

“However, the market is likely to have learnt its lesson from the bouts of complacency which preceded Brexit and the election of president Trump, and this may to some extent ameliorate any potential reaction in the event of a French surprise.”

Plagued by anaemic economic growth, a bloated public sector and an unemployment rate of at least 10 per cent over the past five years – during which Ireland’s jobless rate fell from 15.1 per cent to 6.4 per cent – France has also been the target of repeated terrorist attacks, forcing citizens to live under a state of fear and suspicion. All of these have fed Le Pen’s campaign.

With Germany also facing into elections later this year, the Franco-German axis that has traditionally anchored the European Union has been hit.

A Le Pen victory threatens to destroy it, with her promise to call a referendum on ditching the euro, dubbed “Frexit”.

Meanwhile, Mélenchon offers even less hope of bolstering the alliance, according to commentators.

A critic of German chancellor Angela Merkel’s euro zone policies, he wrote in his 2015 book, Bismarck’s Herring (The German Poison), that “Germany is again a danger”, its “imperialism” is returning” and the EU is its “new empire”.

Mélenchon’s anti-capitalist, anti-EU policies, including reducing the working week from 35 to 32 hours, raising social welfare benefits and taxing earnings of more than €33,000 a month at 100 per cent, have increasingly captured the minds of voters in the past month.

At 65, he is the oldest among the main candidates in the race and he pulled out all the stops this week as he used hologram technology to beam his image and message to rallies held simultaneously in six cities.

“The polls are rather tight by any reading, with the top four candidates all close to each other,” said Ciaran O’Hagan, the Irish man in charge of Société Générale’s European rates strategy in Paris, where he has worked for more than a decade.

However, the “markets are pricing in a strong probability that either Mr Macron or Mr Fillon will make it into the second round and that ultimately one of them [will become] president. That is the judgement of markets, given the relatively dear valuations for French assets.”

Polls currently suggest that Le Pen would lose against every other candidate by a large margin in the second round with Macron who is seen as the most “market friendly”, beating her with 65 per cent of the vote.

“It is the large margin in the second round that is seen as comforting,” said O’Hagan.

Still, with opinion surveys showing that as many as 40 per cent of voters remain undecided days before the vote, French financial regulators aren’t taking any chances.

When French bond yields spiked on poll gains by Le Pen, financial supervisors and investors reportedly pressed the country’s banks to be prepared for any market ructions – from bank runs to credit crunches – in the event of Front National party’s leader securing the keys to the Elysée Palace, the official residence of the president of France since 1848.

“The base case remains for Macron to prevail, which would likely result in a modest rally in French government bonds as well as other European assets in general and also the euro itself,” said Grogan at Bank of Ireland.

“Election uncertainty has been a major factor suppressing performance in these assets in recent weeks and, were this uncertainty to subside, this would likely reverse.”

In Ireland, sources said earlier this month that the Government would await the outcome of the French election before making a final call on its long-awaited return of AIB to the main Irish and London stock exchanges.

The State is aiming to raise up to €3 billion from the sale of an initial 25 per cent stake in the bank, which cost almost €21 billion to rescue during the crisis.

However, UK prime minister Theresa May is likely to have complicated the timing of the AIB flotation further with her decision this week to call a snap election on June 8th.

Deutsche Bank strategist Jim Reid said in a note to clients this week that market volatility in the run-up to the French election has been much lower than he had expected.

“It might be that we’re now past the calmest point of the year,” he said.

Meanwhile, back in west Cork, Geraldine Emerson is looking beyond the French election.

“It’s not only about France at this stage. I really hope that Europe stays together and not crumble apart. There are so many companies that are connected in different ways to various countries across the EU,” she said.

“We have plans. If our exports business to France works well, then we’d like to try the [contracted supply] model in other countries as well.”