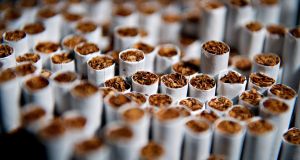 Philip Morris International, the world’s largest publicly-traded tobacco company, dropped the most in five months after price increases and new technologies failed to offset a decline in demand for cigarettes.

The company, which sells Marlboro and other brands outside the US, posted first-quarter earnings of 98 cents a share (€0.91), excluding some items. Analysts had projected $1.03 on average.

The results signal that Philip Morris has a long road ahead in becoming a next-generation tobacco business. The New York-based company has invested more than $3 billion in so-called reduced-risk products to replace cigarettes, but the shift will take time to pay off.

“We had expected a weak quarter, but this is weaker than even we had anticipated,” Exane BNP Paribas analyst Eamonn Ferry said in a report. “Combustible cigarette volumes are very weak.”

The shares fell as much as 4.4 per cent to $108.96 in New York, the biggest intraday decline since November. The stock had gained 25 per cent this year through Wednesday’s close, helped by optimism that Philip Morris can pivot to newer tobacco formats.

Chief executive André Calantzopoulos blamed the results on “lower cigarette volume – primarily related to low-price brands in specific markets where the impact on our profitability was limited – and certain timing factors.”

The outlook for traditional tobacco remains bleak: Cigarette shipment volume fell almost 12 per cent to 173.6 billion units in the quarter. But alternative technologies, such as heated sticks, are growing quickly.

While they’re still a small part of Philip Morris’s business, heated-tobacco shipments surged to 4.4 billion units from 453 million a year earlier. Mr Calantzopoulos said he expects combined cigarette and heated-tobacco volumes to decline 3 per cent to 4 per cent in 2017, with increases by the new products helping lessen the blow of decreases by the old.

Overall revenue was disappointing in the first quarter. Excluding excise taxes, sales amounted to $5.63 billion, compared with estimates for $6.48 billion.

The company expects earnings of $4.84-$4.99 a share this year – 4 cents higher than previously projected – because of a tax benefit.

Mr Calantzopoulos envisions a smoke-free future for the company, with all customers switching to alternative products such as its iQos device. Net revenue from its reduced-risk lineup was $733 million in 2016.

“It is extremely encouraging that already today, despite persistent capacity constraints, 1.8 million consumers have effectively stopped smoking and have switched to our heat-not-burn alternative, iQos,” he said.

The company has launched iQos in 24 markets outside the US, including Colombia and Lithuania in the first quarter and Poland and Serbia this month. The company plans to be in 30 to 35 markets by the end of this year. The iQos technology works by heating a tobacco plug, called a HeatStick, and releasing nicotine without lighting it on fire.

The rate of expansion to new markets will depend on manufacturing capacity for the HeatStick inserts, Mr Calantzopoulos said in February. Limited production capped the number of units sold in 2016, he said.

To boost capacity, Philip Morris will convert a cigarette factory in Greece to produce HeatSticks. That will increase planned capital expenditures to $1.6 billion from $1.5 billion, chief financial officer Jacek Olczak said in a call with analysts. The company will be able to produce about 50 million units by the end of this year, with more than 32 billion available for commercialisation.

The tobacco giant has said it plans to release a version of iQos in the second quarter with a new user interface. It also plans to do city tests of two other reduced-risk platforms this year.

Philip Morris is working with sister company Altria Group, which sells Marlboros in the US, on a range of noncombustible nicotine products. Philip Morris has submitted two applications to the US Food and Drug Administration for iQos. The first, filed in December, would allow iQos to be sold with a label indicating it is less harmful than regular cigarettes. The second, filed in March, is the prerequisite to sell the product in the US If approved, Altria will offer it under a licensing agreement.

British American Tobacco (BAT), Philip Morris’s biggest rival, had a similar partnership with Reynolds American. BAT agreed to purchase Reynolds earlier this year for about $49 billion, snapping up the maker of Camel and Newport cigarettes. When the deal is completed, the combined company would top Philip Morris as the biggest publicly traded tobacco maker.