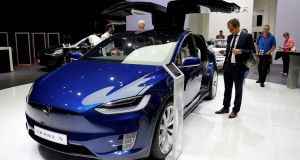 The Tesla Model X car is displayed on media day at the Paris auto show. The firm’s shares fell nearly 1 per cent following its biggest ever recall. Photograph: Benoit Tessier/Reuters

Tesla is to recall 53,000 of its Model S and Model X cars globally to fix a parking brake issue.

Tesla’s total production for 2016 was 83,922 vehicles and included both Model S and Model X.

“The electric parking brakes installed on Model S and Model X vehicles built between February and October 2016 may contain a small gear that could have been manufactured improperly by our third-party supplier,” Tesla said in a statement on its website.

The carmaker said there had been no accidents or injuries due to the issue.

Tesla said less than 5 per cent of the vehicles being recalled may be affected and it would take less than 45 minutes to replace the brakes.

The company also said it would send an official recall notice to its customers.

Tesla, led by entrepreneur Elon Musk, had said last year it would recall 2,700 Model X sport utility vehicles in the United States due to a faulty locking hinge in third-row seats.

The company said on Thursday it was working with Italian supplier Freni Brembo to get the replacement parts.

Brembo did not immediately respond to a request for comment.

1 Working from home: New costs, new stresses and little relief
2 We are ‘sale agreed’, but can we go back with a lower offer?
3 Joint accounts: if one of us dies, can the other access the money?
4 HSBC board rethinks overhaul and seeks even deeper cuts
5 Investor alleges fraud over collapse in property fund value
6 Airline stocks take off as coronavirus worries ease
7 DAA offers workers up to two years’ wages in redundancy plan
8 ‘I’ve so many outgoings with family life . . . it puts manners on you’
9 Electrical contractors fear closure under new pay law
10 Fierce debate brews as EU Commission lays out recovery plans
Real news has value SUBSCRIBE