A PMI index for manufacturing and services rose to 56.7 in April 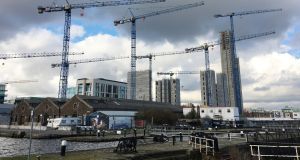 Euro zone price pressures remained elevated, with both input prices and those charged for goods and services holding close to their six-year highs. Photograph: The Irish Times

Euro-area economic momentum accelerated to its fastest pace in six years in April, signalling a strong start to the second quarter amid buoyant demand and strong growth in employment.

A Purchasing Managers’ Index for manufacturing and services rose to 56.7 in April from 56.4 in March, IHS Markit said in its flash reading released on Friday. Economists surveyed by Bloomberg predicted the measure would remain unchanged. Job creation rose to the highest level in almost a decade with more evidence of growing wage pressures, according to the report.

The euro-area recovery is gathering pace despite Sunday’s election in France, which could result in a president who is openly hostile to the single currency. The economic resilience is slowly pushing the European Central Bank toward a discussion about an exit from its unprecedented stimulus, which it has pledged to keep in place until at least the end of this year.

“France’s elections pose the highest near-term risk to the outlook, but in the lead-up to the vote the business mood has clearly been buoyant,” said Chris Williamson, chief business economist at IHS Markit.

Markit’s measure for growth in business activity in France has overtaken that seen in Germany amid rising optimism about the future, according to the report. Even so, both economies -- the two biggest in the euro area -- are enjoying their best spells of expansion in six years.

“Elsewhere in the region the pace of expansion has accelerated to a near 10-year high, cementing the increasingly broad-based nature of the upturn,” Williamson said.

A gauge for manufacturing in the euro region advanced to 56.8 from 56.2 in March, the highest level in six years, IHS Markit said. The services PMI rose to 56.2 from 56.

Price pressures remained elevated, with both input prices and those charged for goods and services holding close to their six-year highs.