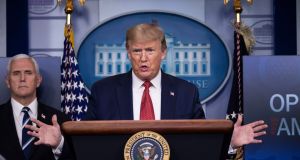 Global stocks rallied on Friday on US president Donald Trump’s plans to revive the coronavirus-hit US economy and hopes of a potential drug to treat Covid-19, while the dollar fell amid a growing risk-on sentiment among investors.

The bulls charged ahead on reports that patients with severe COVID-19 symptoms had responded positively to Gilead Sciences’ experimental drug, remdesivir, lifting its shares 8.3 per cent.

Boeing’s announcement it would resume production of commercial jets next week also buoyed sentiment and gave traders a reason to shrug off a 6.8 per cent decline in Chinese gross domestic product, the first contraction since 1992 when modern record-keeping began.

The dollar slid against the euro and Japanese yen and gold fell as much as 2 per cent as investors globally drew comfort from Trump’s plans to gradually re-open the US economy in a staggered, three-stage approach.

China along with Germany, Italy, Spain and other parts of Europe also have plans to reopen their economies even as the death toll from the pandemic rises.

Economies will not fully recover until people are comfortable they can move about in public without being exposed to the coronavirus and getting sick, he said. In addition, laid-off workers must be rehired but there is a silver lining in that at least half indicate their situation is temporary, he said.

The pan-European STOXX 600 index rose 2.38 per cent and is up nearly 8 per cent over the last two weeks. Among European indices, the Iseq was one of the top performers, rising 3.83 per cent.

Meanwhile, credit rating firm S&P Global downgraded another clutch of countries hit by the coronavirus and warned that even triple-A and other top-rated nations could be cut depending on how they manage the longer-term consequences of the pandemic.

In Europe, Italy’s government bonds, which have been under pressure as the country’s virus difficulties push its debt-to-GDP ratio towards 150 per cent, rallied again. – Reuters

1 ‘Saudi Arabia is where the opportunities will happen in future’
2 MSD buys Takeda biologics plant in Dunboyne
3 Dublin-based Coroflo gets Richard Branson’s approval, raises €650,000
4 Panama Papers: From the Guatemalan Drug Queen to the ‘most dangerous mobster in the world’
5 Apple and Samsung announce unthinkable partnership
6 Pendulum proves there’s no business like show business
7 World’s most renowned hacker on how pranks led to prison
8 Oura ring: Wearable device that tracks activity and vital statistics
9 Property tax: What does it mean for you?
10 Ten of the most mysterious aircraft disappearances
Real news has value SUBSCRIBE