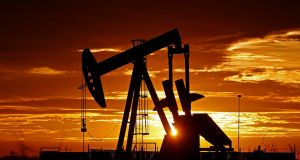 European shares closed firmly in the red on Wednesday, ending a five-day rally as the first batch of earnings reports underlined the business damage from the coronavirus pandemic, while energy stocks sank on worries of a plunge in oil demand.

The Iseq index sank 4.1 per cent as investor sentiment disimproved over the course of the session. It was another rough day for bank stocks, with AIB dropping almost 10 per cent to just under 92 cent, while Bank of Ireland plunged 15.4 per cent to €1.36.

The busiest stock was Glenveagh Properties, which plummeted 14.7 per cent to less than 47 cent, while other property stocks also fared badly, with Cairn Homes down 9.7 per cent at 73 cent.

Paddy Power owner Flutter Entertainment was among the very few climbers, adding 1 per cent to €86.84.

Sliding oil prices and grim predictions about the global economy dragged the Ftse 100 down, while expectations of a longer British lockdown knocked mid-cap shares. The blue-chip Ftse 100 fell 3.3 per cent, while the Ftse 250 posted losses of 4.6 per cent.

Shares in Royal Dutch Shell and BP fell more than 6 per cent each as oil prices dived on oversupply concerns and forecasts of global demand crumbling to its worst levels in a quarter of a century.

Shares in cinema operator Cineworld slumped 21 per cent to the bottom of the mid-cap index, while insurer Hiscox dropped 13.3 per cent after brokerage Peel Hunt cut its price target on the stock.

Shares in Kromek, a global supplier of medical devices, jumped 9.4 per cent after announcing plans to start manufacturing medical ventilators in Britain and globally under a licence from Japan’s Metran.

The pan-European Stoxx 600 index slipped 3.3 per cent, having risen almost 8 per cent since April 6th on early signs the health crisis was ebbing and on hopes that sweeping lockdown measures would soon be lifted.

The benchmark index has recovered about 22 per cent since hitting an eight-year low in March, but is still down almost 26 per cent from a record high hit in mid-February, and analysts warned an uptick in coronavirus cases could spark another sell-off.

In Germany the Dax was down 3.9 per cent, while the Cac 40 in Paris traded 3.8 per cent lower, with French energy giant Total down 6 per cent after oil prices sank.

France became the fourth country to report more than 15,000 deaths due to coronavirus after Italy, Spain and the US.

Dutch company ASML Holding, a key European supplier to chipmakers such as Samsung and Intel, fell 3.2 per cent after reporting worse-than-expected earnings.

On Wall Street, the S&P 500 recoiled from a four-week high, as dire forecasts for the worst economic downturn since the Great Depression were strengthened by a crash in business activity and dismal first-quarter earnings reports.

The S&P energy sector slumped 7.3 per cent and was on track for its worst day in nearly a month as oil prices sank after reports suggested persistent oversupply and collapsing global demand.

Bank of America and Citigroup shed as much as 6.5 per cent as they joined JPMorgan Chase and Wells Fargo in reporting a slump in first-quarter profits.

JC Penney slumped 28.1 per cent as sources said the retailer was exploring filing for bankruptcy protection after the virus outbreak upended its turnaround plans. The biggest US health insurer, UnitedHealth Group, rose 2.1 per cent as it maintained its 2020 profit outlook. – Additional reporting: Reuters.