Investors’ appetite for risk has returned for now 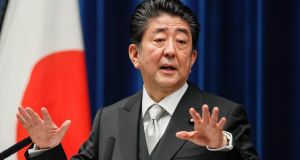 Japan prime minister Shinzo Abe has declared a state of emergency in Tokyo and its surrounding regions.

European shares rallied for a second straight day, with investors focusing on early signs that the coronavirus pandemic may be easing, even as major companies still take steps to shore up cash after lockdowns crushed global demand.

The pan-European Stoxx 600 index finished up 1.9 per cent, having earlier traded 3 per cent higher.

The Iseq in Dublin closed up 2 per cent, while the blue-chip FTSE 100 in London also advanced 2 per cent and the mid-cap FTSE 250 soared 5.1 per cent.

Ryanair and the banks led Irish gains, with the airline finishing up 5.3 per cent. AIB closed 12.9 per cent higher, while Bank of Ireland rose 5 per cent. Food groups Glanbia and Kerry advanced 9 per cent and 4.6 per cent respectively.

Spanish stocks rose 2.3 per cent as coronavirus deaths slowed for a fourth day on Monday, prompting the government to contemplate a gradual easing of a nationwide lockdown. The German Dax added 2.8 per cent, while in France, the Cac 40 finished up 2.2 per cent. The indices all closed lower than their daily highs.

The benchmark Stoxx 600 index has now gained more than 22 per cent since hitting an eight-year low in March, but remains more than 24 per cent below its February record high, when the worldwide spread of the novel coronavirus sparked a virtual halt in business activity.

Wall Street stocks opened higher and sustained their gains in the first three hours of trading, as early signs of a slowdown in coronavirus cases in US hot spots raised hopes that sweeping lockdown measures were working.

However, traders said it is just a short-covering rally and lacks conviction, with many long-term investors still waiting for the details of Japan’s $1-trillion economic stimulus package.

Indeed, overall activity was subdued, with the volume of shares traded on the main board valued at 2.82 trillion yen, well below its average over the last 20 days of 3.51 trillion yen.

On the flip side, shares that gained recently were pressured by profit taking.

Fujifilm Holdings, which produces of Avigan anti-flu drug, a potential Covid-19 treatment, retreated 5.5 per cent after hitting a record high on Monday.

Japan prime minister Shinzo Abe on Tuesday rolled out a package worth 108.2 trillion yen (€913 billion), or 20 per cent the size of the economy, vowing to take “all steps” to combat deepening fallout from the virus pandemic.

At a press briefing, Mr Abe warned that hospitals were reaching capacity and Japan was making plans to house the mildly sick in unused Olympic facilities as he declared a state of emergency in Tokyo and its surrounding regions.

1 Apple tax case: Four individual lawyers paid over €500,000 each
2 Should my mam wait for house prices to drop before buying?
3 Parts of Brown Thomas and Arnotts to reopen next week
4 Brother is dragging his heels as executor of uncle’s will - is there anything I can do?
5 Thailand attempts to lure travellers with luxurious lockdown options
6 ‘I have a talent for justifying purchases’
7 Irish comic book artist designs face mask coverings for young flyers
8 Irish whiskey sales near milestone of 12m cases a year
9 Printing firm Reads secures injunction preserving Nassau Street access
10 Hangover for the drinks sector as pint sales go flat
Real news has value SUBSCRIBE