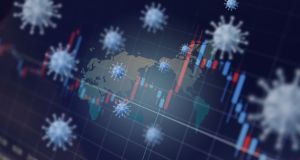 Stock markets were in decline again on Wednesday. Photograph: iStock

European shares closed down more than 3 per cent and Wall Street stocks recoiled from four-week highs on Wednesday amid dire forecasts for the worst economic downturn since the Great Depression and dismal first-quarter earnings reports, as well as a fresh plunge for oil prices.

The benchmark Stoxx 600 index ended 3.3 per cent lower, with sentiment having worsened as the session progressed. The pan-European index has recovered about 22 per cent since hitting an eight-year low in March, but is still down almost 26 per cent from a record high hit in mid-February, and analysts warned an uptick in coronavirus cases could spark another sell-off.

In Dublin, the Iseq finished 4.1 per cent lower amid another difficult session for banks and property stocks. The German Dax was down 3.9 per cent, while the Cac 40 in Paris traded 3.8 per cent lower.

European stocks were weighed by a drop for Dutch company ASML, a crucial supplier to Samsung Electronics, which reported a 40 per cent decline in first-quarter earnings and refrained from providing guidance for the next three months amid uncertainty caused by the pandemic.

Signs of a longer lockdown in Britain knocked 4.5 per cent off UK’s mid-cap shares, while plummeting oil prices hit the commodity-heavy FTSE 100 index, which finished down 3.3 per cent.

Shares in Royal Dutch Shell, Total and BP each fell about 6 per cent each as oil prices dived on reports that highlighted persistent oversupply and collapsing demand concerns due to global coronavirus-related lockdowns.

US stocks slumped more than 2 per cent minutes after the opening bell as investors weighed a record drop in retail sales as well as earnings reports that lent weight to forecasts pointing to the biggest economic slump since the 1930s.

After the first four hours of trading, the Dow Jones Industrial Average was still down more than 2 per cent, the S&P 500 down 2.3 per cent and the more tech-heavy Nasdaq down 0.1 per cent.

Bank of America and Citigroup shed as much as 6.5 per cent as they joined JP Morgan Chase and Wells Fargo in reporting a slump in profits.

The earnings season is expected to provide more of a sense of how the pandemic will affect global commerce. Investor pessimism over the economic damage of the virus is at “extreme” levels with cash positions at the highest since the 9/11 terrorist attacks, according to a Bank of America survey, while the International Monetary Fund said the “Great Lockdown” recession would be the steepest in almost a century.