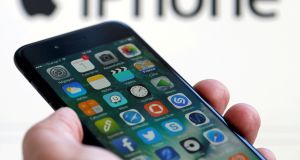 In New York, Apple was the biggest drag on all the three major indexes, while Microsoft and Amazon were out of sorts. Photograph: Regis Duvignau/Reuters

Activity on Wall Street dominated global markets on Thursday as a fresh sell-off of technology shares, including Apple, on the 10th anniversary of the iPhone, took the shine off plans by a number of US banks to return billions of dollars to investors after passing annual stress tests.

Closer to home, European shares fell the most in nine months amid heightened concerns, following a series of hawkish speeches by the head of the European Central Bank, Federal Reserve in the US and Bank of England, that the post-crisis era of cheap and easy money is fast approaching a turning point.

Dublin wasn’t spared the general malaise taking hold across international markets, with the Iseq index falling 0.5 per cent to 6,820.96, marking its third straight session of decline.

Market heavyweights such as CRH and Kerry Group were out of sorts, falling 1 per cent and almost 2 per cent, respectively.

Smurfit Kappa advanced by 1.8 per cent to €26.98, as UK rival DS Smith posted better-than-expected full-year results and indicated it can recover recent increases in containerboard prices by pushing up cardboard box prices. Dealers said that this is good news for the wider industry.

Banks were also in demand, as the prospect of higher interest rates globally – which has also sent bond yields higher – is seen as boosting income across the sector. AIB added 1.9 per cent to €4.85, bringing the stock’s advance since the bank returned to the main Dublin and London markets last week to just over 10 per cent.

The dividends of such interest-rate sensitive stocks look less attractive when rates are expected to rise.

However, banks were in demand, while miners Rio Tinto, Glencore, Antofagasta and Anglo American also lent support as copper and gold prices climbed against the weaker dollar.

Shares in broadcaster Sky rose 3.3 per cent after the UK government said that it intended to subject Rupert Murdoch’s takeover of the group to an in-depth investigation after finding the $15 billion deal risked giving the media mogul too much power over the news agenda.

Sky’s shares rose on hopes a full investigation could still be averted by concessions over its 24-hour TV news channel.

Utilities, which tend more to follow the movements of bonds, dropped with fixed income and after UBS cut its rating on the sector to neutral from overweight. It said valuations, especially relative dividend yields, no longer look attractive and the sector is “in need of a pause”.

Construction companies tumbled, with builders in France dropping after that nation’s government was said to consider cutting an infrastructure-investment program to reduce public spending.

H&M rose 2.7 per cent after it forecast at least 25 per cent growth in online sales this year, reporting second-quarter earnings that beat analysts’ estimates.

Wall Street extended losses in early afternoon trading on Thursday with all three major indexes on track to post their biggest one-day drop in a month as a sell-off in technology stocks deepened.

Tech stocks, which have led the S&P 500’s record run this year, pulled back recently after some investors questioned the sector’s high valuations and shifted to defensive sectors.

Apple was the biggest drag on all the three major indexes, while Microsoft and Amazon were out of sorts.

However, shares of the top six US banks rose after the Federal Reserve cleared them in the second part of its annual stress test, allowing them to raise dividend payouts and share buybacks.

By early afternoon, the Dow Jones Industrial Average was down 0.77 per cent, while the S&P 500 was off 0.9 per cent and the Nasdaq Composite index had lost 1.6 per cent.