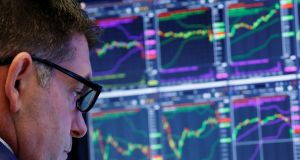 The New York stock exchange: The tech sector, which has been under pressure recently due to lofty valuations, was up 0.81 per cent on Wednesday. Photograph: Lucas Jackson/Reuters

European shares ended flat on Wednesday as a third day of gains for banking stocks in a session dominated by bets about future central bank action offset a tech sell-off in London and on the continent.

In the US, the S&P 500 and the Dow Jones Industrial Average were on track for their best one-day percentage gain in two months as financial stocks led a broad rally. The Nasdaq rose more than 1 per cent as tech stocks rebounded across the Atlantic.

The Iseq finished the day down by about one-third of a percentage point.

Bank of Ireland was up 1.8 per cent and AIB was up more than 0.5 per cent, as European banks generally rose on the back of comments from the ECB to play down fears that it might soon tighten monetary policy.

Tullow Oil, which issued a sanguine trading statement and announced cuts to capital expenditure, rose more than 2.4 per cent. It maintains its primary listing in London, but it still gave a fillip to the Iseq.

Datalex, the travel software firm whose backers include Dermot Desmond, fell further and finished down almost 2.5 per cent. Investor Nick Furlong has been selling down his previously large stake in the business over recent weeks.

The FTSE 100 index fell 0.6 per cent. A brief recovery was brought to an end in afternoon trading when Bank of England governor Mark Carney said the bank would debate an interest rate increase in the coming months.

Diageo – which benefits from a weaker sterling – was among the heaviest fallers. The mid-cap index, which is more domestically focused, did slightly better, ending down 0.3 per cent. Fund platform Hargreaves Lansdown fell 2.3 per cent following an industry report by Britain’s markets watchdog.

A weaker oil price was also a drag on UK blue chips, with shares in majors Royal Dutch Shell and BP dropping 0.6 and 1 per cent respectively. Shares in Bunzl, a provider of distribution and outsourcing services, bounced 1.5 per cent.

Anti-virus provider Sophos fell 5.9 per cent after a downgrade from Cenkos to hold from buy that followed a 75 per cent rally for the stock over the past six months.

The STOXX 600 ended flat as further gains among financials, which benefit from tighter monetary policy, drove the pan-European index off a two-month low hit in morning trading.

Europe’s broader banking index rose 1.3 per cent, leading sectoral gainers in the region. Top gainer was Italy’s UniCredit, up 4.1 per cent, followed by Bankia, which rose 4 per cent, helped by a price target upgrade at Berenberg one day after the Spanish lender bought smaller peer BMN in a $924 million deal.

Technology stocks fell 0.6 per cent, taking their cue from losses in US peers in the previous session, with stocks involved in cybersecurity and virus protection failing to get a boost from the latest cyber attack that swept the globe.

Nestle rose 1.3 per cent, remaining close to record highs, after the Swiss food giant said it planned a 20 billion Swiss francs share buyback, a few days after activist shareholder Third Point began a campaign to boost performance at the group.

Heading into the afternoon, the Nasdaq Composite was up 65.84 points, or 1.07 per cent, at 6,212.46. The tech sector, which has been under pressure recently due to lofty valuations, was up 0.81 per cent. Apple, Amazon and Facebook were the top boosts to the Nasdaq.

Oil futures climbed to their highest in more than a week despite a surprise build in crude inventories, as buyers were encouraged by a small weekly decrease in US production. KB Home was up 3.7 per cent at $23.66 after the homebuilder increased its full-year forecast. General Mills rose 1.6 per cent to $56.46 after the Cheerios maker’s quarterly profit beat estimates.