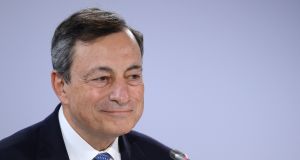 Senior figures at the European Central Bank indicated the market misjudged remarks by ECB president Mario Draghi that were seen as signalling a move towards withdrawal of economic stimulus.

The euro came off a 2017 peak and euro zone sovereign bond yields cooled on Wednesday, after senior figures at the European Central Bank indicated the market misjudged remarks by Mario Draghi that were seen as signalling a move towards withdrawal of economic stimulus.

The currency fell into negative territory for the session — down 0.2 per cent at $1.1320 — after Bloomberg first carried the reports. Earlier, the euro set another high for 2017 of $1.1366. The turnaround took its gains for the calendar year to below 8 per cent.

Beforehand, investors were focused on the ECB president’s comments that “deflationary forces have been replaced by reflationary ones”. The phrase was delivered in a keynote speech at the ECB’s annual conference in Portugal, as a signal the central bank would reduce its bond buying in the coming months because an improving economy required less monetary easing.

“Yesterday’s remarks from Draghi were intended to have an effect, now the ECB seems to be managing out the effect of the effect,” said Stephen Gallo, European head of FX strategy at Bank of Montreal.

The yield on 10-year German debt also turned round as the session developed, to hit the flatline at 0.35 per cent, having been up 4 basis points earlier. Yields move inversely to prices.

The earlier rises in euro zone bond yields had rippled around the world.

The yield on the US 10-year Treasury remained higher, up 2bp at 2.22 per cent on Wednesday, up from 2.14 per cent on Monday — and around the highest level for the benchmark bond since the Federal Reserve raised interest rates this month.

“I reiterate the danger that is the European bond market,” said Peter Boockvar, chief market analyst at the Lindsey Group. “As the ECB gets deeper into its taper, it can single-handedly drag US yields higher.”

Michael Cloherty, a strategist at RBC Capital Markets, said: “Even when it is market specific news to Europe, it affects pricing in the US.”

1 Why is Germany suddenly embracing its inner Keynesian?
2 Passengers face queuing in car parks at Dublin Airport
3 Avoca wins battle with Monkstown locals over cafe operation
4 Major credit union plans to limit savings accounts to €40,000
5 Aer Lingus confirms job cuts due to ‘decimation in demand’
6 Brother is dragging his heels as executor of uncle’s will - is there anything I can do?
7 Tesco to cut emissions by converting waste food from Irish stores to gas
8 Woodchester founder Craig McKinney dies
9 Prospect of foreign travel highlights remaining restrictions here
10 Domestic economy may get boost from multinationals
Real news has value SUBSCRIBE