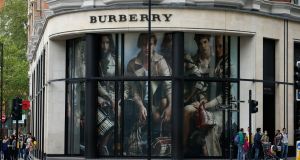 Burberry was last defeated on a non-binding pay vote in 2014 after the group handed Bailey a one-time award to prevent him from leaving. Photograph: Jonathan Brady/PA Wire

Burberry Group Plc’s executive compensation faces growing opposition after the UK’s Investment Association joined the chorus of critics ahead of the fashion company’s annual meeting, where shareholders are set to vote on its pay report.

The group, which advises fund managers, has issued an alert about Burberry, according to a person familiar with the issue. It focuses on awards to chief executive Christopher Bailey and chief financial officer Julie Brown, as well as performance conditions attached to the long-term incentive plan, the person said.

The Investment Association is adding its voice to that of another advisory group, Institutional Shareholder Services, which has urged investors to vote against Burberry’s report on compensation at the July 13th annual meeting. Each group advises as much as 25 percent of the shareholder base of some large UK companies.

The largest shareholder protest this year in the UK has been at educational publisher Pearson Plc, where 61 per cent of investors voted against a pay report that included a bonus for chief executive John Fallon despite a profit warning and stock plunge in January.

The Investment Association declined to comment on its “amber top,” or mid-level alert, saying its report was confidential to subscribers. Burberry is “actively listening to the concerns of shareholders and will continue to look into them”, the company said.

Burberry was last defeated on a non-binding pay vote in 2014 after the group handed Bailey a one-time award to prevent him from leaving. New chief executive Marco Gobbetti is set to take over next week, with the current chief concentrating on creative work.

ISS described criteria for an exceptional award of £5.4 million to Bailey as “murky”. The group also criticised a buyout intended to compensate Brown for the loss of pay when she left medical-devices maker Smith and Nephew Plc.

1 Player Wills site: Hines and APG to seek permission for 416 homes
2 EU divisions laid bare by ‘frugal four’ Covid recovery proposal
3 Pricewatch: Coronavirus has given us four categories of shopper
4 Eir sells mobile mast infrastructure company for €300m
5 Several jobs saved after sale of office supplier Spicers Ireland
6 Economies can be restarted if bold and imaginative choices are made
7 Bayer reaches agreement in 125,000 US cancer lawsuits
8 Dawn Meats reopens plant supplying McDonalds burgers
9 Pilita Clark: A lot of us are losing it in lockdown – but we really shouldn’t
10 Reopening economy does not cause coronavirus spike – researchers
Real news has value SUBSCRIBE