Iseq closes up 0.14 per cent as AIB heads to the top of the class 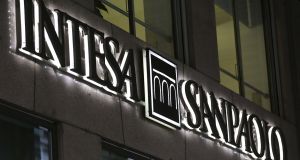 Markets performed well on Monday with Europe benefitting from the news that Italy had reached a deal to wind up to failed banks. In Ireland it was a mixed day for banking stocks with AIB continuing its upward trajectory since the government sold its stake and took the stock public last Friday.

In the UK there was little movement on the back of Theresa May’s deal with the DUP, although sterling edged higher on the day.

US stocks pared gains on Monday as a recovery in technology and oil stocks paused gains.

The return of AIB to the stock market has been received well by investors so far. The sale of the government’s 25 per cent stake in the bailed out bank has bode well for the stock and in its second day of trading it closed up by 2.15 per cent.

Despite a very heavy news flow around banking today, Bank of Ireland performed below par and closed down by 1.32 per cent on the day. It saw the highest volume traded on the Iseq 20 index on Monday.

Irish stocks aren’t immune to international tragedies with the news around the Grenfell tower disaster affecting building materials companies according to analysts. As US peers fell in early trade, Kingspan traded down on the day by 2.33 per cent to close at €29.55.

The blue chip FTSE index was up 0.3 per cent at its close, paring back its earlier gains slightly as energy shares eased.

Financials provided the biggest boost to the FTSE, adding 11.5 points to the index, with heavyweight banks HSBC and Barclays both up 1.2 per cent.

While earlier gains among oil majors BP and Royal Dutch Shell helped underpin the market, both heavyweights saw gains ease as the price of oil steadied. The news that British Prime Minister Theresa May had struck a deal with Northern Ireland’s Democratic Unionist Party had little impact on the internationally facing FTSE 100 index, though sterling ticked higher.

European shares rose on Monday as banks rallied after Italy reached a deal to wind up two failed regional banks.

The deal to wind up the regional banks could cost taxpayers up to €17 billion but puts an end to a long-running crisis and leaves the lenders’ good assets in the hands of Intesa Sanpaolo. Shares in Intesa, Italy’s largest retail bank, rose 3.5 per cent while the euro zone bank index rose 1.1 per cent.

Nestle led STOXX gainers, up 4.3 per cent. Activist investor Daniel Loeb’s Third Point unveiled a stake of more than 1 per cent, urging the group to improve its margins, buy back stock and sell its stake in L’Oreal.

European tech stocks came under pressure, however, down 0.5 percent following a 3.7 per cent fall in Dialog Semiconductor, which dropped after a media report cited comments from the chipmaker’s CEO that the group is looking for larger acquisitions to reduce its reliance on Apple.

US stocks pared gains in late morning trading on Monday, as a recovery in technology stocks and oil prices stalled.

Oil prices hovered near last week’s seven-month lows, hemmed in by a relentless rise in US supply, bloated global inventories and a surge in demand for short sale contracts that signals investors see potential for a price fall.

Oil majors Exxon and Chevron were down and were among the biggest drags on the three major indexes.

Also dampening sentiment was a fall in technology stocks, as investors, worried about stretched valuations, switch to defensive sectors. The S&P utilities and telecommunications sectors led the gainers.

Domestic economy may get boost from multinationals 07:25
Government restores hope to the tourism and hospitality sector 07:22
Tesco to cut emissions by converting waste food from Irish stores to gas 07:16
Why is Germany suddenly embracing its inner Keynesian? 06:28
Irish stocks gain on Government’s accelerated reopening plans 19:37

1 Why is Germany suddenly embracing its inner Keynesian?
2 Major credit union plans to limit savings accounts to €40,000
3 Tesla’s Elon Musk calls for breakup of Amazon in tweet
4 Passengers face queuing in car parks at Dublin Airport
5 Tesco to cut emissions by converting waste food from Irish stores to gas
6 Brother is dragging his heels as executor of uncle’s will - is there anything I can do?
7 Land dispute between Citywest Hotel owner and neighbours before court
8 Avoca wins battle with Monkstown locals over cafe operation
9 Ikea among major retailers to reopen next week
10 Penneys will not reopen on Monday despite expected changes to lockdown rules
Real news has value SUBSCRIBE