Financials weigh on European shares while oil drags US markets 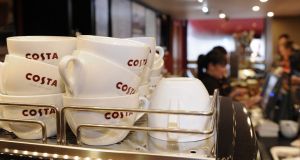 Irish shares dropped slightly on Wednesday, or by 0.08 per cent, broadly in line with trading across Europe.

Across Europe, both financial and retail stocks sent shares sliding.

Bank of Ireland was the most traded stock on Wednesday, benefitting from the news flow around AIB’s initial public offering. The stock pushed up by 0.44 per cent to close the day.

With considerably less volume traded on the day, Smurfit Kappa was the biggest percentage gainer on the Iseq 20. One of the company’s peers announced price increases while strong container board demand in Mexico, a significant market, sent the stock up by 1.52 per cent to close at €27.31.

Despite weak oil prices over the past few days, Ryanair dropped by 0.63 per cent on the Irish market. Dublin traders said that profit taking was the cause of the stock closing at €18.62.

Dalata hotel group also closed down, albeit on very low volume, despite good hotel room data showing that revenue per available room in Dublin grew by 7.3 per cent in May. That wasn’t enough to push Dalata upwards and it ultimately closed down by 1.18 per cent.

The blue chip FTSE 100 was down 0.3 per cent at its close, weighed down by another weak session for oil stocks as the oil price headed lower.

The FTSE hit a session low after Bank of England chief economist Andy Haldane signalled he would back a rise in interest rates in the second half of this year, which also sent sterling higher.

Provident Financial was the biggest individual faller, plummeting up to 20 per cent after it warned that disruption from the reorganisation of its consumer credit division would weigh on its results for the rest of the financial year.

Gains by Whitbread and Centrica were a bright spot, however. Costa Coffee and Premier Inn owner Whitbread was the top performer among UK and European shares, up 3.4 per cent after reporting sales rose 7.6 per cent in the first quarter.

London-focused house builder Berkeley Group also made gains among lacklustre mid-caps, up 2.1 per cent after its full-year results beat expectations with a 53 percent increase in profits before tax. However, it warned uncertainty related to Brexit could cut into demand for houses.

The plunge of Provident Financial weighed on sentiment for banks, which were among the top fallers on France’s CAC 40 and Germany’s DAX.

Belgium’s KBC was the worst-performing on the banking index, down 4.01 per cent as its investor day got off to a disappointing start. KBC released a new core equity tier 1 target, a key metric of banks’ solvency, of 16.6 per cent.

Oil prices pared brief gains to trade lower, hovering near seven-month lows, putting pressure on the market. The commodity has fallen 20 per cent this year as a global glut continues to weigh despite efforts by major producers to reduce output. Oil prices are on track for their biggest slide in the first half of any year since 1997.

Biotechs were the biggest gainers on the Dow with Celgene, Regeneron and Amgen trading up between 2 per cent and 5 per cent. Seven of the 11 major S&P sectors were lower, with the energy index’s fall leading the decliners.

The financial sector fell as US Treasury yield curve held near 10-year lows. Goldman Sachs was off marginally and Bank of America fell, ultimately weighing on the Dow and the S&P.