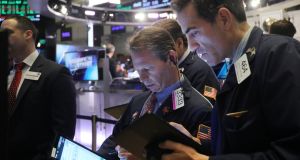 Traders returned from the Christmas break to digest comments from Beijing that it was in close contact with Washington about an initial trade agreement, shortly after US President Donald Trump talked up a signing ceremony for the recently struck Phase 1 trade deal. Cooling US-China trade tensions have fuelled the latest leg of Wall Street’s record-setting rally.

With just days to go until the year-end, the benchmark S&P 500 is up 29 per cent so far in 2019, which would be its biggest annual percentage gain since 2013. The Nasdaq posted a record closing high for a 10th straight session, its longest such streak since 1997.

Shares of Amazon jumped 4.4 per cent after a Mastercard report showed that US shoppers spent more online during the holiday shopping season than in 2018, with e-commerce sales hitting a record high. “The important part is that the online sales were much stronger than expected. The brick-and-mortar were less than expected, so the online sales, and principally Amazon, saved the day,” said John Conlon, director, equity strategy at People’s United Advisors.

Hong Kong stocks fall amid concerns over possible US sanctions 07:49
EasyJet, American Airlines to cut 30% of staff amid coronavirus disruption 07:31
Irish economy to contract by 12%, ESRI forecasts 06:39
ESRI warns of biggest slump ever, Brown Thomas’ plans and Michael O’Leary has a point 06:30
Irish banks’ failure to innovate could leave them written off for good 06:30

1 Ross O’Carroll Kelly column 'not racist towards English people'
2 Beware of the rush to get back to normal business amid Covid-19
3 Irish economy to contract by 12%, ESRI forecasts
4 What is in the EU’s €750bn recovery plan and how will it affect Ireland?
5 ESRI warns of biggest slump ever, Brown Thomas’ plans and Michael O’Leary has a point
6 Brown Thomas and Arnotts shoppers will be able to book time slots for entry
7 EU needs to rebuild GDPR after only two years
8 EasyJet, American Airlines to cut 30% of staff amid coronavirus disruption
9 Joint accounts: if one of us dies, can the other access the money?
10 Michael Smurfit: total lockdown of economies a ‘serious mistake’
Real news has value SUBSCRIBE